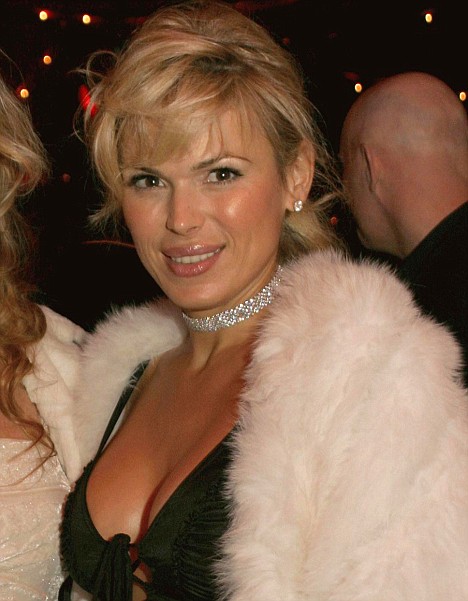 Sean Penn has been in Haiti for five months doing killer work as a Good Samaritan. Vanity Fair has an elucidating piece on him in their new issue.

No one can question Penn’s commitment. But who’s paying for it?

The answer is blonde, beautiful 36 year old Diana Jenkins, a Bosnian refugee whose husband, Roger Jenkins, is a British billionaire banker. Jenkins is famous for rescuing failing banks with Middle East money. That’s how he saved Barclays last year from being taken over by the British government–with $15 billion from oil sheiks.

He’s been written about extensively in Britain, particularly in the Times:

“Jenkins is known primarily as a tax expert. The 52-year-old is famous for devising complex structures that ferry profits around the world, helping companies to minimise their tax bills. Tax experts credit him as the leading authority on “double dipping” – in which companies get two sets of tax deductions from two different countries. Although there are no legal improprieties in such arrangements, they are the scourge of governments around the world.”

Ironic then that money made from skirting taxes is now going to rebuild the infrastructure of Haiti.

More importantly, Roger Jenkins is reportedly the money behind “American Idol” creator Simon Fuller‘s to buy CKX,  the company that owns his creation. Reports say he and Jenkins have put together a $1 billion fund for this purpose.

The Jenkins family merits a lot of interest themselves. Roger’s brother David Jenkins owns a company that makes a drink called Designer Whey–a protein drink for athletes just cited by Consumer Reports for having high levels of metal and arsenic. (To be fair, others were much higher.)

David Jenkins, a British Olympic sprinter in the early 70s, spent time in jail for steroid smuggling in the 1980s. When he got out of jail, he started an American company called Next Protein. Now he’s a billionaire living in San Diego.

Diana Jenkins— her real name is Sanela Dijana Catic–was raised in poverty, she’s told the British press–and emigrated to London 20 years ago. When she met Jenkins she says he wasn’t wealthy, just a well to do banker. Jenkins, 18 years her senior, credits her with changing his life.

Once they conquered Barclays and made billions, the couple became incredibly popular in Hollywood. They’ve thrown many A list parties, and raised money for George Clooney‘s Darfur efforts. Diana and her kids now live in a Malibu mansion where, presumably, Roger joins them from his international finance exploits.

Now Diana Jenkins has taken a page from her brother-in-law’s book and started her own drink company. Neuro Drinks, distributed by Pepsi, are sugar-and-caffeine beverages loaded with Vitamin B, presented in colorful bottles, and marketed in the diet, sleep, and improved sex categories.

Diana Jenkins is also funding a big human rights project at UCLA and operates a charity called the Sanela Diana Jenkins Foundation in Bosnia in memory of her brother. (The latter isn’t registered in the US or UK. Originally named for the brother, Irnis Catic, it seems now to be named for its patron, who herself received an award from the Foundation according to its website.)

In Haiti she and Penn have started the J/P Human Rights Organization. And so, as the universe works, all this money is now underwriting Sean Penn‘s humanitarian efforts and helping the people of Haiti.