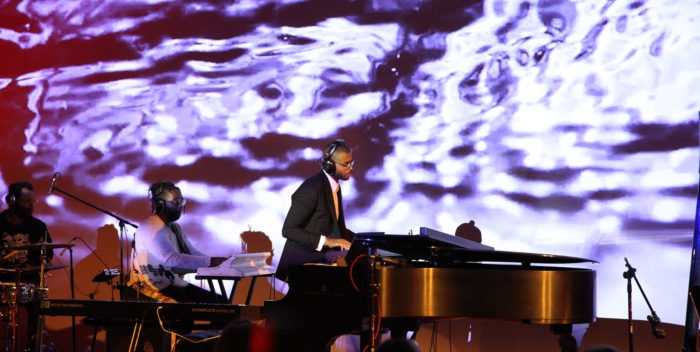 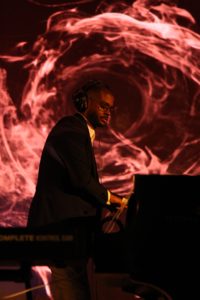 Director Peter Farrelly was touting his Oscar winning “Green Book” with the movie’s composer, Kris Bowers, at a recent thank you/listening party for the widely talented composer at the Ross House in the Hollywood Hills.

Farrelly led a Krug champagne toast in Kris’s honor celebrating his stellar achievements with a roomful of people who Kris feels are instrumental to his success. Given that the fact he’s only 30, his achievements are indeed spectacular. Kris grew up in LA a musical prodigy. Then New York’s Julliard beckoned. He graduated from the famed academy, all the while performing no less then at the White House for Obama. The Queen of Soul herself Aretha Franklin, was a huge fan of his and had Kris play at many of her parties.

Kris not only composed the “Green Book” score, he coached Mahershala Ali and played the piano in the film. Kris and his actress fiancé Briana Nicole Henry– who’s knocking them dead (literally) on “General Hospital” these days– are one of the loveliest and most talented couples in Hollywood.

The event included a multi-media performance with visuals corresponding to his music. With the homeowner/sound mixer John Ross (‘Silver Linings Playbook’) manning the massive sound board of the newly remodeled theater in the house. Kris discussed the pieces he scored and was performing from Ava Duvernay’s current “When They See Us,” “Green Book,” “Black Monday,” and “Monster and Men.” He shared how much he was affected by the new Netflix series “When They See Us” about the Central Park Five. He said, “I wrote some of the music almost like a horror score because what was happening to these innocent young men was so truly frightening.”

The emotion in the room was palpable as Bowers performed on a Steinway Grand along with Lara Somogyi (harp), Adam Agati (guitar), Solomon Dorsey (bass) and Aaron Steele (drums). As Farrelly pointed out, “Kris’s career has no bounds. He can do anything. He’s just absurdly talented.” And for the moment, an Emmy nomination for his poignant score for “When They See Us,” is well deserved and hopefully forthcoming.