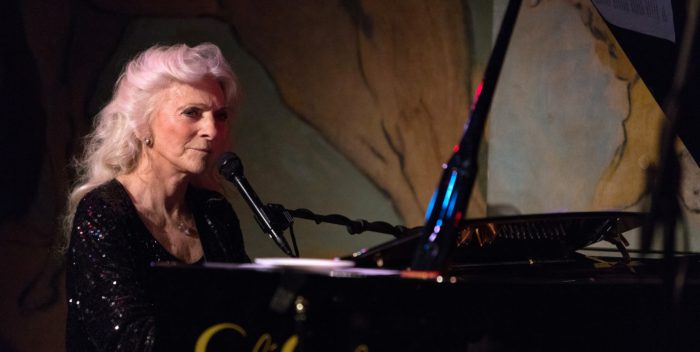 “I love you,” Judy Collins, a vision in white from mane to silvery toe, shouted out to Clive Davis, and to everyone present at the Café Carlyle for opening night of her enchanting show. She calls the evening “A Love Letter to Sondheim,” but her range of feeling, and vocals, encompasses all, even in her finale, “Send in the Clowns,” which she introduces with a most subtle political jab, “we know where the clowns really are.”
Her own composition, “Maria,” a nod to West Side Story, reminds her, “This land was made by dreamers.” Of course her career spans lots of political moments, as she knew Dylan, Stephen Stills, and Leonard Cohen. When she sings his “Suzanne,” her crystalline voice fills the room, and out pour memories of his coming to her with material because he knew she could sell a song: “What can I tell you about Leonard
Cohen?” Her friend brought him to her, saying, “His poetry is obscure. He’s never going to go anywhere.” But, says Judy, he was the smartest one. He died the morning of the election.
After a beginning with Joni Mitchell’s  “Chelsea Morning,” the music segues to her Sondheim theme via a nod to Joan Rivers. She was talking about childhood, and how loved Collins felt, as opposed to Rivers who used to quip that she was given a hairdryer as a bathtub toy. Sondheim attributes his success to his childhood living with Oscar Hammerstein II who encouraged his career. Collins’ dad used to take her to the park in Denver. She sings “Finishing the Hat” from Sunday in the Park with George,” and “No One is Alone” from Into the Woods. We were all humming Sondheim at show’s end. “Isn’t it rich?” Indeed it is.