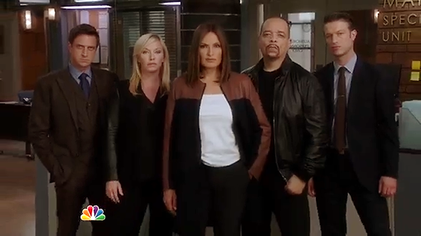 How long has “Law & Order SVU” been on? Seventeen years? A hundred? Recently renewed for a new season next September, “SVU” continues to amaze and surprise everyone. On Wednesday night, the show scored 7.73 million viewers, the largest number of any scripted show on that night. (The exceptions were “Survivor” and “American Idol.”)

Plus, “SVU” had a 1.7 in the key demo. That may not seem like a lot, but of the seven dramas on Wednesday night, “SVU” was the run away hit. They even beat “Modern Family” and “Chicago PD.”

Wednesday night’s episode was typical of how good the show has been this year. In a ripped from the headlines story, the writers combined an Elliot Spitzer type story with Jared Fogle of Subway sandwich fame. Josh Pais played a deputy police commissioner who railed against child pornographers in public. But at home, he was secretly one himself. And he was married to an assistant district attorney (Jessica Phillips, great performance) who prosecuted pedophiles. She was clueless.

The writing was top notch and the performances were uniformly excellent. What really struck me was how good Mariska Hargitay still is, better than ever really. She should really be back in the Emmy nomination game. On network TV, she is really a cut above. So is Broadway vet Raul Esparza, who plays ADA Barba. Their energy has given the show a kick in the pants.

Sadly, the current showrunner of “SVU,” Warren Leight, is leaving after this season. He’s run the show for five years, and literally breathed life back into it. With Chris Meloni, Dann Florek, and Richard Belzer gone, Leight added a whole new cast around Hargitay and Ice T. Kelli Giddish, Raul Esparza, and Peter Scanavino have really gelled into a superb supporting cast. Plus, Hargitay herself is now directing more episodes. She has a new one just being cast this week.

It does look like “SVU” may make 20 seasons. With ratings like this week’s, and maybe some Emmy action this summer, that would be terrific. Plus, a new plot is brewing, with Peter Gallagher as Deputy Chief Dodds and Broadway star Andy Karl as his cop son, Mike. They already look like they could be spun off into a new show.