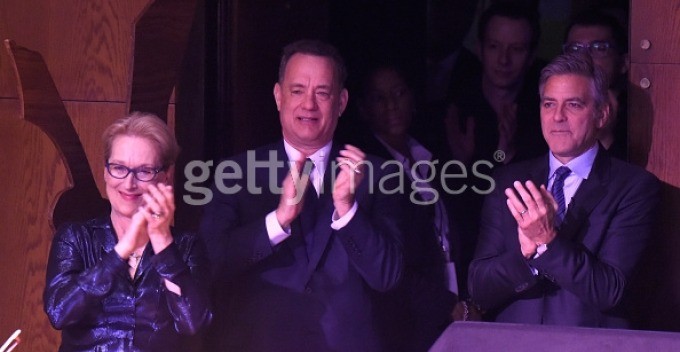 So how does Meryl Streep get to the Paul Newman charity show at Lincoln Center Monday Night? She joined Tom Hanks, George Clooney, Natalie Cole, Carole King, Aloe Blacc, Danny DeVito, David Letterman and Shaffer by driving herself in from Connecticut, and driving back. No assistant, no driver, no chauffeur. In fact, I’m told no one brought an entourage to the remarkable show produced by famed impresario Lou Adler for Newman’s SeriousFun (formerly the Hole in the Wall Camps) at Avery Fisher Hall.

Yours truly bought a cheap ticket to the show because the publicist said all the press seats had been given away. So how funny was it when I scoped out those seats and there were three, all empty, off the center aisle, row R? Did I move down from the heavens? You bet. I didn’t want to miss a thing. And the ticket fee? Well worth it as a donation to the camps started by Paul Newman and Joanne Woodward more than 40 years ago.

Streep kicked off the show, making introductions, etc., reminding everyone that his year Newman, a movie icon and philanthropist, would have turned 90! Ninety! Streep was followed by a smattering of Serious Fun kids, performing Katy Perry’s “Roar” like professionals.

This is where Mr. Entertainment himself, Tom Hanks, the Mayor of Entertainmentland, stepped in and took over. He read a long poignant letter from one mother, then mixed and mingled with kids on stage with incredible ease. The kids are amazing, of course, all suffering from chronic diseases, all thriving because of the network of camps around the world.

During the hour and forty five minute show, we heard Carole King — singing better than ever, like it was 1976 all over again– with new soul sensation Aloe Blacc. King sang “Child of Mine” and played “Beautiful” on the piano, accompanying herself. Later she and Blacc turned out a “You’ve Got a Friend” that was so exciting and soulful that Carole was grinning from ear to ear as Blacc did his best Donny Hathaway.

A total surprise in the middle of the show: David Letterman and Paul Shaffer, maybe introducing their new post- Late Night routine. Dave did some very funny stand up, then he and Paul pulled off a musical top 10 list of parody songs written for Paul Newman movies.

More music– from opera great Renee Fleming, and from Natalie Cole, who turned the place out with a rare rendition of “This Will Be.” (Natalie’s making some nice coin from that song as it’s licensed to eHarmony dating for commercials.)

Yes, there’s a wonderful video from Robert Redford about his long friendship with Newman, and their charitable work, and how they made “Butch Cassidy.” Two of the kids sing– Graham O’Shaunhessy has a rich baritone voice. Sixteen year old Gavyn Bailey confidently leads a bunch of kids through “Raindrops Keep Falling on My Head.”

And finally it’s George Clooney. Making a speech about the camps and all the countries from a Teleprompter, he fumbles, recovers– about the number of countries in the world– and quips, “My wife is the smart one in the family.” He gets the biggest laugh of the night.

Remember– I’m not even supposed to be there. But at the cocktail party in Avery Fisher Hall, I chat with Adler, who did a superlative job. He produced “Monterey Pop” in 1968, gave us the Mamas and the Papas, and Carole King’s run of hit albums from 1970-77, and delivered “The Rocky Horror Picture Show” to the world. His son, Cisco Adler, just produced the new Cody Simpson album.

Lou told me he is going to release some “Rocky Horror” 40th anniversary outtakes, and a new DVD of recently discovered Carole King performances from Central Park, 1973. He put Aloe Blacc with King last night and found magic. ALoe Blacc, who I keep running into, is going to really break big in 2015. Did he and Carole rehearse? “Oh yes,” he said, shaking his head. “I asked for a lot of rehearsal. She’s one of my idols.”

We end the evening meeting 12 year old Cassidy Reynolds and her mom, Shannon, from Seattle. Cassidy is a product of the Seattle camp, Camp Korey, where she’s a superstar. She suffers from a rare form of dwarfism, her mom says. This will not stop Cassidy, who should have already been a guest on Ellen DeGeneres and wants to meet Jimmy Fallon. She is precocious beyond her years, a dynamo. She wants to have a career– now- as an inspirational speaker.

From behind her big glasses, flashing an endless smile, Cass looks around the room and says, “I’m on celebrity overload.”

Me, too. And I wasn’t even supposed to be there.