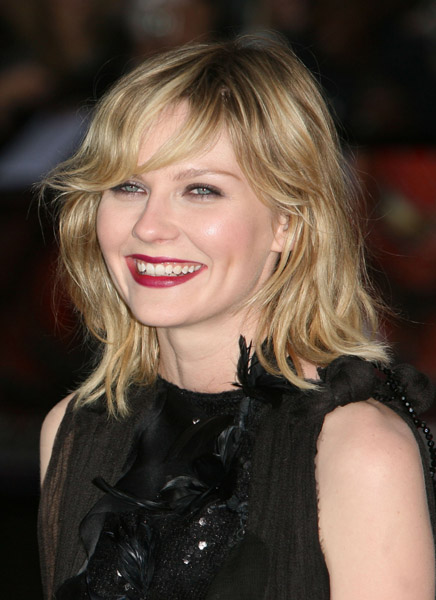 Kirsten Dunst–a late entry in the Oscar race  in Andrew Jarecki‘s “All Good Things”–is shooting Jack Kerouac‘s classic novel, “On the Road” right now. She plays Mary Lou Camille, one of the female leads in the Walter Salles production. (Marylou is played by Kristen Stewart.)

“Believe me, I feel the pressure,” she told me last night at the “ATG” premiere. “I know how big it is. Every time I’ve been on the set, I’ve thought, ‘This is On the Road.'”

In the film, Dunst plays Kathie, Ryan Gosling is “David” or Robert; and Lily Rabe is Susan. Frank Langella is sublime as always as the Durst patriarch, Seymour. They are outstanding performances. And while Gosling goes for Best Actor in “Blue Valentine,” Dunst has a square shot for Best Supporting Actress as Katie/Kathie.

You think you know Kirsten Dunst. But she’s only 28. “I’m at a funny age,” she told me last night. “There aren’t so many great parts. Believe me, I’m looking.” She’s being choosy. Her portrayal of Katie will knock her up several pegs. She’s a serious, dramatic actress who can carry a film.

“ATG” is true crime murder mystery changes the names of the real people, but is very much based on the 1982 disappearance–still unsolved– of Kathie Durst. the young wife of New York real estate heir Robert Durst. He’s from the wealthy, dynastic Durst family, here with name changed to Marks.

Imagine that in 28 years, no one has ever figured out what happened to Kathie Durst. It’s been surmised that Robert, her crazy husband, killed her. Jarecki’s very taut thriller traces the couple’s marriage, the disappearance, and a 2001 trial for another crime Durst was accused of: dismembering a friend. He cut the guy up, but a brilliant Texas jury acquitted him. He served four years in jail for miscellaneous crimes. But Durst never stood trial for Kathie’s murder or the murder of his female best friend, Susan Berman. He remains the only suspect in the latter.

Durst, according to the New York Times, likes the movie. He’s also living on a $65 million settlement from his family. Crime pays! The Durst Organization has threatened to sue the filmmakers for maligning them. Kathie Durst’s brother told me: “We pray for Robert every day to do the right thing. We just want to know what happened to Kathie.”