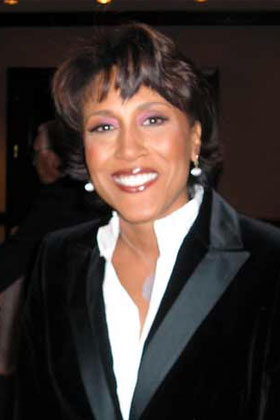 (Clarification update: Leslie Simmons of AFTRA wants me to point out that only Charles and Sam received Lifetime awards. The others got awards in their respective fields.)

The winners inspired an equally eclectic group of presenters: Don Imus, for Sam Moore; Tony Bennett, for Juanes; Bill Geist for Osgood. And in the audience a sprinkliing of soap stars including Robert S. Woods from “One Life to Live” and Linda Dano. And my personal soap hero, Don Hastings, who’s played Dr. Bob Hughes for 50 years on “As the World Turns.”

Also in the audience: singing sensation Sarah Dash of Labelle fame, whose busy schedule can be followed online here. And humorist Chris Cerf, who was part of the “Sesame Street” crowd. And yes, I did get to meet Kevin Clash, who’s been the voice of Elmo for 27 years. That was a treat!

Bob Edwards, of NPR fame, emceed the evening, and Jim Kerr, of NY radio fame, kept the ball rolling in the audience. But the night belonged to the speechifiers, starting with Tony Bennett. He spoke of visiting Puerto Rico as a young man and meeting Pablo Casals. “He didn’t know who I was,” Bennett recalled, but the classical music legend welcomed him anyway. It was Bennett’s first experience with “world music” and it led him to Juanes in recent years.

Imus and Moore got the biggest laughs of the evening. And Moore spoke eloquently about the need for the passage in Congress of the Performance Rights Act. “Performing artists shouldn’t have to be considered charity cases,” he said to thunderous applause.

I loved running into Don Hastings, too. He’s going to wrap up five decades on “As the World Turns” this summer. “We still don’t have a finish date, maybe in July,” he said. Will he miss the show? “It hasn’t hit me yet because I’m still working.” He wants to keep working, too, and joked with Bob Woods about playing a serial killer on his soap, “One Life to Live.” “I wouldn’t kill you, though,” joked Hastings. “I like you!”