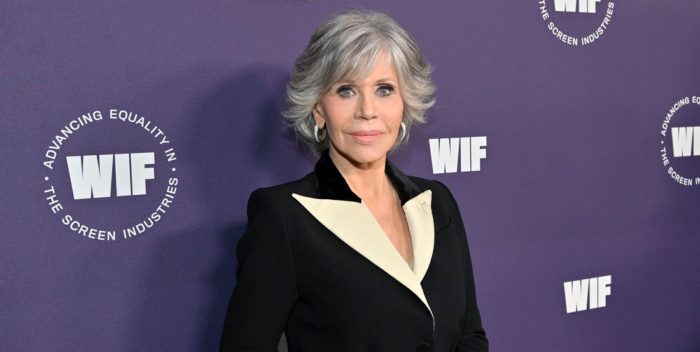 What can you send Jane Fonda on her 85th birthday? Maybe a donation to Greenpeace, the organization that helps her with Fire Drill Fridays. Or the foundation she started in Atlanta, her very successful and important Georgia Campaign for Adolescent Power and Potential.

The two time Oscar winner turns 85 today, and it’s years young, of course. This week she says that she has stood down cancer, she’s in remission after a brutal recent round of chemotherapy. And still, in that time, Fonda worked and was politically active, always standing up and doing what’s right. She’s amazing.

Indeed, Jane did make three movies in the last year as well as completing the seventh season of “Grace and Frankie,” Netflix’s longest running original show. One of the movies is “80 for Brady,” which co-stars Sally Field, Rita Moreno, and Lily Tomlin. Another dark comedy with Tomlin, “Moving On.” just got sold. And there’s also “Book Club 2” with Candice Bergen, Mary Steenburgen, and Diane Keaton.

Jane will celebrate her birthday and remission — what she calls “her greatest gift” — with a few pals and her kids and grandchildren. It will be an intimate gathering, full of love and appreciation. So we’re sending the same from New York, and fans will do the same from around the world.

Jane has always been a trailblazer for women’s rights, climate change, and human rights. When the country was in trouble in the 70s, she didn’t shy away from telling it like it is. Below is a great 1977 interview with Johnny Carson when Jane was promoting one of my favorite movies, “Julia.” (She received an Oscar nomination for the role.) The subjects they covered– and what she is advocating– are no different than what she’s talking about 45 years later! Fonda has always been many steps ahead of the crowd. I’m so glad we’re finally catching up to her!