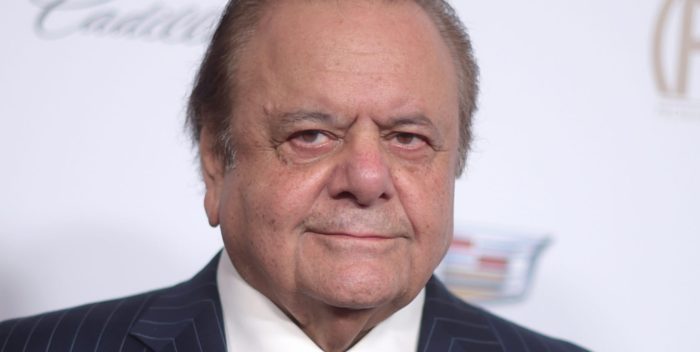 I am so sorry to hear about Paul Sorvino passing away at age 83. He was a true New York original, one of a kind, a great actor, singer, and raconteur. There isn’t a memory I have of him when he wasn’t smiling a big grin, having a grand time. God bless him.

I think Paul was one of the very first celebrities I got to know well when I stumbled into entertainment writing. Mira was still a kid, and Paul was married to his second wife. I knew him, of course, from his Tony nominated performance in “That Championship Season” on Broadway (I saw him, I was 16) and from “Law & Order,” “Goodfellas,” among other things.

Whether it was in Elaine’s or anywhere else, if Paul was having dinner you knew that singing would come next. He had what I thought was a big bass profundo voice but was something of a tenor in reality, and was ready to perform at the drop of a spoon. (He really wanted to be Pavarotti, I think.) Luckily, he was a terrific amateur opera singer, and everyone loved it when he let loose.

A few years ago, at Christmas time, Paul serenaded a group of us after a movie premiere party at Kappo Masa restaurant. Broadway star Jesse Mueller was also there, as well as “Big Eyes” stars Amy Adams and Christoph Waltz. It didn’t take much encouragement to get Paul going. Thank god I took this video below:

There are so many great stories about Paul Sorvino. A lot of people don’t know this, but for a very short time in the mid 90s, Paul commanded an Italian restaurant under his own name. It was on Third Avenue and 73rd Street where the T Bar was recently supplanted by a seafood restaurant. He invited me to the opening, which was full of mobsters. Paul sang, and the mob applauded. The big moment? When former Governor Mario Cuomo arrived. I was so excited about seeing him and thought everyone else was, too. But it was Mrs. Cuomo who the crowd parted for. Sorvino gave me a knowing look, like you see who’s the boss. I never forgot it.

More recently, shortly before the pandemic, I ran into Paul and his wife, Dee Dee, at another party. It was a quite a fluke of a reunion. We reminisced about Mira’s great success in the 90s starting with “Mighty Aphrodite.” We talked about his old gang of pals that included director John Sayles and soap opera writer Jean Passanante, from Hoboken. Paul was very excited about Dee Dee, who’s a powerhouse, and we planned to get together soon. Alas, it never happened.

My condolences to the Sorvino family. Paul Sorvino was one of a kind. It was such a jou to have known him and to have been witness to just a little bit of his world.

PS Just in case you were wondering, he never forgave Dick Wolf for writing him off of “Law & Order” after one season. He was right, too. His 31 episodes live on in “Law & Order” rerun history and they are among the very best.