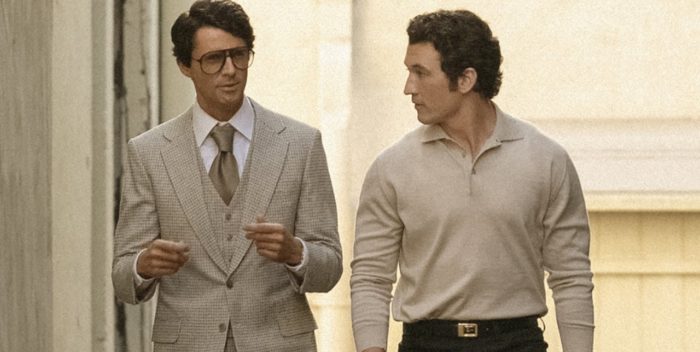 Voting for Emmy nominations ends June 27th at 10pm. I’ve already expressed enthusiasm for a bunch of shows that deserve noms in their show and acting categories including “Succession,” “Hacks,” “Mrs. Maisel,” “Billions,” “The Gilded Age.”

Now add to that group Paramount Plus’s “The Offer,” all about the making of “The Godfather.” If you’re voting in the Emmys and are a part of the showbiz community, this is a series you must watch now, Put everything aside. I finally did it this weekend, and I’m the happier for it.

I’d been hearing about Matthew Goode’s portrayal of Robert Evans, the Paramount exec who was married to Ali McGraw and got the movie made. Goode skipped making the current “Downton Abbey” movie so he could do this job. I was lucky enough to know Bob Evans, and I can tell you Matthew Goode deserves any award he’s eligible for. It’s a runaway hit performance. He has Evans down to his perpetual stuffed nose. Even better, he makes him real, human, three dimensional. He’s a charmer who can talk his way in and out of everything. He’s that Goode.

Goode is in the Limited Series/TV movie category as supporting actor. Right there with him is Juno Temple, known now from “Ted Lasso.” Temple is a revelation as Bettye, Al Ruddy’s assistant. Watching “The Offer,” you wonder if “The Godfather” would ever have been made without Bettye. Temple is a fizzy cocktail of Rosanna Arquette and every Girl Friday in the movies. I love the way she takes on Gulf and Western’s Charlie Bludhorn, and how she bonds with all the other women with stakes in the making of the movie. Temple must be in for Supporting Actress in Limited Series/TV movie.

In lead as Al Ruddy is Miles Teller, currently in the number 1 smash movie, “Top Gun Maverick.” Teller got famous with Nicole Kidman in “Rabbit Hole,” hit a home run in Damien Chazelle’s “Whiplash,” then drifted a little bit. I really think Al Ruddy is the part he was meant to play. As Ruddy, Teller is standing up to the mob, balancing Evans and Bludhorn, dealing with Barry Diller (here renamed Barry Lapidus, played so well by Colin Hanks). I love the fact that Teller has come into his own this year. Make sure he’s in the lead actor, Limited Series/TV movie.

Not everyone can be stuffed into awards categories. Giovanni Ribisi is sensational as mobster Joe Columbo, as well. Little by little, “The Offer” builds. All the below the line categories in drama are solid here, too, with the period look consistent and rich. “The Offer” is a lovely surprise.