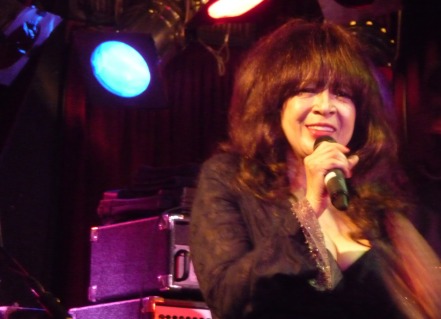 The late great Ronnie Spector has a newly revised version of her memoir, “Be My Baby,” published yesterday by Henry Holt. The book was out of print for years. But in the months before her death Ronnie went back through it, fixed it up, and added a postscript about her life post-Phil Spector.

Ronnie also added a new foreword by Keith Richards. They were friends since they first met in 1964 in what Keith recalls as a “dank” UK nightclub, where the Ronettes and Stones were on tour together. “It was love at first sight,” Keith recalls.

The friendship was meant to be for a lifetime. For the last 20 or more years, Keith and Patti Hansen, and Ronnie and husband Jonathan Greenfield lived near each other in western Connecticut. Keith says right before 9-11, Ronnie started coming over to record in his home studio. They recorded a cover of Ike and Tina Turner’s “It’s Gonna Work Out Fine.” They also did a duet called “Love Affair.” Keith writes, “Then came the bomb,” and that was it. He says he still has tracks he hopes to put out one day– I sure wish he would do it soon.

Keith says the last time he saw — and heard — Ronnie was in March 2020 right before the pandemic. He was in the dentists’ chair in New York and suddenly heard her singing “Be my little baby…”

“She was having her teeth done the same day and decided to surprise me with a serenade,” he says.

Tomorrow is Ronnie’s memorial service. I was honored to be invited but cannot attend because one of my nieces is graduating from college. I wish I could be there. Ronnie was unique, a sweetheart who survived the pioneering days of pop, to say the least. That voice, her voice! It never fails to cut through the noise, it’s so distinctive — not just the Ronettes hits, but all the records she made in the late 70s and early 80s like “Say Goodbye to Hollywood” with the E Street Band, and “Take Me Home Tonight” with Eddie Money. For me, I hear it, I’m gone. So raise a glass to Ronnie tomorrow. She will always be missed, but live on and on in our ears.