Julian Fellowes‘ long delayed “The Gilded Age” ended its first season tonight with a lot of potential. But it took a long time to get there.

When the first episodes were unveiled, the series — set in 1882 Manhattan — felt like a pale reminder of “Downton Abbey.” Many of the characters, especially those working “down below,” were reminiscent of Mrs. Patmore and Carson and Mrs. Hughes, etc.

On top of that, some of the acting was very awkward and the cast was uneven. Christine Baranski and Cynthia Nixon hit their stride right away. But Carrie Coon, who plays the manipulative and social climbing Mrs. Russell, felt out of her depth. Her cadences were harsh and she seemed uncertain of who Mrs. Russell was or what she was up to.

Luckily, by tonight’s full episode, Mrs. Russell pulled it together. I’m still not cheering over Coon’s speech pattern, but she definitely feels more settled in the role. She had to tonight. All of Mrs. Russell’s machinations– using her daffy daughter to negotiate a place in society — came together. At the same time, her husband’s JR Ewing like jockeying paid off for her. Morgan Spector is really grinning like a Cheshire cat with the character of Mr. Russell.

“The Gilded Age” has a well off Black family living in Brooklyn, who I love even though I’m not sure how much verisimilitude is there. But Denée Benton and six time Tony winner Audra McDonald are so perfect in their roles as daughter and mother, let their stories continue and grow, please. There’s also a gay story that seems a little far fetched for its time and modeled on “Downton Abbey,” but alright, it’s going to get interesting.

In the end, though, “The Gilded Age” is about class, not race or sex. It’s about “new money” forcing itself into the old world. Fellowes stops just short of revealing the Russells are Jewish, although Mr. Russell makes reference to a Jewish banking firm. Baranski’s Agnes van Rijhn is very snobby, impatient with all newcomers, but has a tenderness for Black people. (We don’t know what she’ll say if she discovers her son is gay.)

I can’t help think of one of Baranski’s golden moments in movies: she plays Claus von Bulow’s girlfriend, Andrea Reynolds, in “Reversal of Fortune.” von Bulow summons lawyer Alan Dershowitz (Ron Silver) to defend him. Baranski enters the room as Jeremy Irons (von Bulow)  interviews Dershowitz. Waggng a finger, Reynolds pipes up, “I made him hire you. Get the Jew, I said.” No kidding, this is all over Aunt Agnes’s face now whenever the Russells are mentioned. It’s too funny. Baranski and Nixon, playing her sweet sister, must get Emmy Awards. 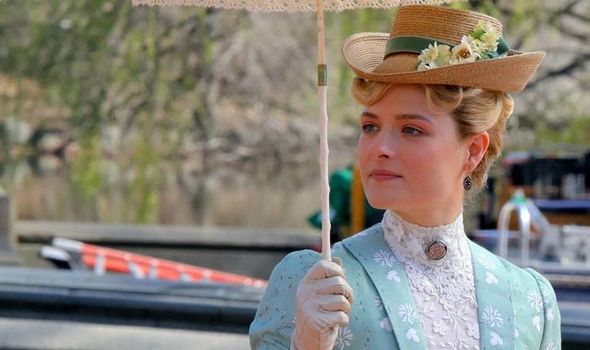 The great pleasures of “The Gilded Age,” by the way,” are all the Broadway actors. Donna Murphy as Mrs, Astor, Michael Cerveris as a mysterious butler, etc. But my favorite, to my surprise, is Kelli O’Hara as the cousin who is guiding young Marian (Louisa Jacobson). O’Hara is a Broadway superstar who’s never had a good TV or movie role. It turns out she’s killing it. I can’t wait to see more of her story.

The show hinges on  ingenue Marian, niece of the wealthy society sisters played by Baranski and Nixon. Yes, Jacobson is Meryl Streep‘s daughter in real life, but Jacobson has found her rhythm. She is clearly the central character, the one who we’re rooting for among all these bustles and footmen. Her Marian managed to dodge a bad marriage tonight, but what fun Fellowes will have devising her next chapter. So we wait for Season 2. but just one thing: someone turn down the sharpness of the lighting!