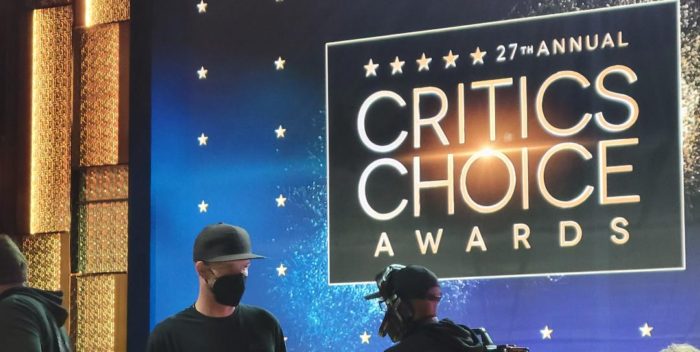 For the second time Sunday, Jane Campion’s “The Power of the Dog” won Best Picture, this time at the Critics Choice Awards seen live on TBS and the CW Network.

The ballroom at the Fairmont Century Plaza was packed to the gills with celebrities and A list stars. But there was also a video hook up to London, where CCA nominees who’d attended the BAFTA awards could participate in the Hollywood show.

“The Power of the Dog” now has a clear path to Best Picture at the Academy Awards after winning these two events on the same day. Campion won Best Director at the Directors Guild on Saturday might. The next hurdle is the Producers Guild Awards next week. If “Dog” can swing that honor, its coronation is a foregone conclusion.

After the show, Netflix hosted an ebullient victory party at the new Century Plaza’s Lumiere restaurant. Both Serena and Venus Williams attended, even though their movie “King Richard” about their father, lost to “Dog.” The Williams sisters danced up a storm with Jane Campion, Maggie Gyllenhaal, director of “the Lost Daughter,” also a Netflix film, and studio chief Ted Sarandos. Also at the party: Lin Manuel Miranda, Jamie Dornan, Nat Wolff, Kaitlyn Dever, Joshua Jackson and wife Jodie Turner-Smith, among others.

Some of the other winning films and actors had their own private gatherings throughout the hotel.

Marlee Matlin, star of “CODA,” arrived but left as soon as the show was over. She was mourning the death of her original co-star, William Hurt, from “Children of a Lesser God.” They were an item in the mid 80s. Hurt, 71, died from prostate cancer it was announced earlier Sunday.

Me? I got to meet Amber Ruffin. My night was made!

BEST PICTURE
The Power of the Dog (Netflix)

BEST DIRECTOR
Jane Campion – The Power of the Dog (Netflix)

BEST ANIMATED FEATURE
The Mitchells vs. the Machines (MGM/UAR)

BEST CINEMATOGRAPHY
Ari Wegner – The Power of the Dog (Netflix)

BEST HAIR AND MAKEUP
The Eyes of Tammy Faye (Searchlight)

BEST ACTRESS IN A LIMITED SERIES OR MOVIE MADE FOR TELEVISION
Kate Winslet, Mare of Easttown (HBO)

BEST ANIMATED SERIES
What If…? (Disney+)