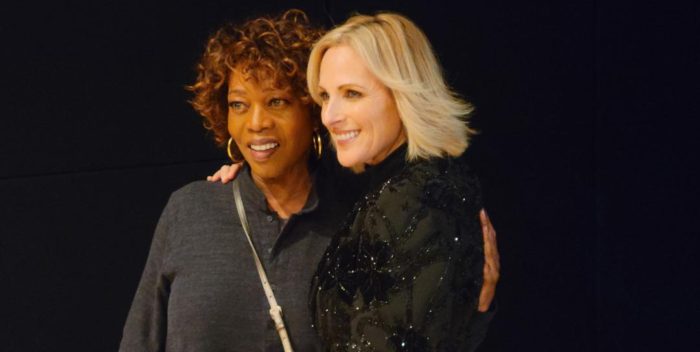 Here are in Hollywood, two weeks before the Academy Awards. All the movies are busy having screenings and Q&As for Oscar voters. Last night I wandered into one for “CODA,” the Apple film suddenly in the lead, perhaps, for Best Picture.

The screening was small, and it was held at the relatively new and futuristic Edition Hotel on Sunset Boulevard. No less a guest presence was in the house than the great actress Alfre Woodard, who was seeing the film for the third time, she told me.

The rest of the audience as a mix of different “below the line” types, music supervisors, and so on. And they were rapt. Sitting in a semi circle in front of the screen when the movie ended were some of its stars: Oscar winner Marlee Matlin (who seems to be glowing these days), Oscar nominee for this film– and likely winner– Troy Kotsur,  Daniel Durant, who plays the put upon brother (and Kotsur’s son), and the great Mexican comic actor Eugenio Derbez, the music teacher from the film who encourages the central character, Ruby (Emilia Jones) to pursue her dreams.

Also on hand was one of the great unsung producer heroes of film the last couple of decades, Patrick Wachsberger, of Lions Gate fame, and most recently movies like “La La Land.”

Consider that three of the panelists are deaf, and speak only through ALS interpreters. Once you see them in action, you understand how this group won the SAG Award for Best Ensemble cast among other prizes. Kotsur, Matlin, Durant, and Derbez are a knockout team: ingratiating, funny, enthusiastic and genuinely thrilled that people like their film.

I got it, and it was unexpected. This gang had the audience eating out of their hands. The guests were rapt. The cast surprised me with their directness about how the deaf acting community lives among the hearing, how they interpret what we– the hearing– blithely expect from them, and how they have forged ahead to have careers. “CODA”– an acronym which means Children of Deaf Adults — is a Big Idea movie of 2022.

Kotsur wears a flat wool cap with a brim indoors and out. He’s said it’s to cut the glare when reading lips. The  53 year old  lives in Arizona and has no connection to the hip Hollywood world. He’s tall and lanky and flaps around like Big Bird with gosh-hi grin from ear to ear. The women seem mesmerized by this charming, refreshing “nobody” who’s already bested the likes of Jared Leto, Bradley Cooper and Ben Affleck to get a nomination.

During the 2o minute talk, Durant, who’s already been on Broadway in the deaf version of “Spring Awakening” and was a regular on “Switched at Birth” on ABC’s Freeform, tells quite a story. Born in Detroit, he grew up in tiny Duluth, Minnesota. He was the only deaf kid in school and had an adult interpreter tagging behind him all day. He was the essential outlier, yet here he is, in an Oscar nominated Best Picture. His future seems assured.

And then there’s Matlin, who won the Oscar in 1987 for Best Actress in “Children of  a Lesser God” — her first acting role. It seemed like a one-off thing, but she has never stopped working in 35 years, and has been a trailblazer for the deaf community. She also somehow has not aged despite having four children! So look back at the Academy in 1987– She beat Jane Fonda, Sigourney Weaver, Kathleen Turner, and Sissy Spacek. You don’t think it at the time, but the Academy voters knew what they were doing!

“CODA” is on Apple TV, and playing in some theaters. It’s such a lovely movie, it’s almost too good to be true. Watch it now. You’ll be rooting for it on Oscar night.