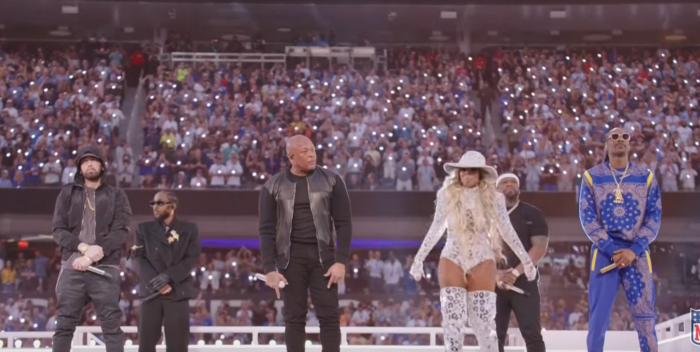 Mary J Blige was such a success at the Super Bowl half time show that she right now has the number 2 single and album on iTunes.

Everyone in this “Avengers” of hip hop was spectacular including Dr. Dre, Snoop Dogg, Kendrick Lamar, Eminem, and 50 Cent. And all of their albums have taken off on iTunes. not just Mary J.

But it was Mary J who just killed it, as the only woman she knocked the show out of the park. She was smart to perform her two biggest hits, “Family Affair” and “No More Drama.” There was no drama on stage, and none of these rappers cursed or used the N word. It was hip hop mainstream, and it worked like a charm!

To watch the video you have to click on the YouTube link below. The greedy morons at the NFL wouldn’t allow embedding of their videos on other sites– even though they’d get the same money from the ads.

WHAT I DON”T UNDERSTAND: an all Black halftime show, commercials mostly directed at the Black audience, which is all good. But Colin Kaepernick never got a job, or his career restored, or an apology. And he was right about everything.