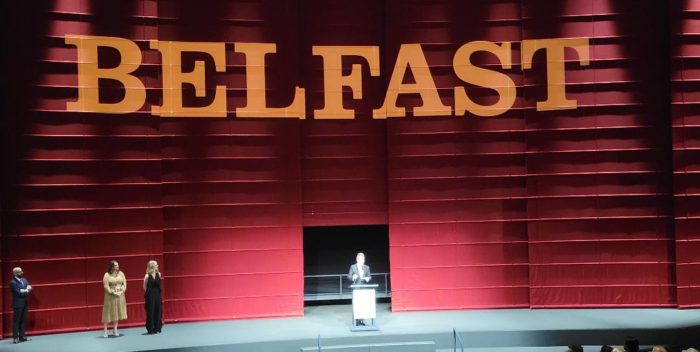 Kids, Focus Features flew me to Hollywood for the premiere of “Belfast” last night at the new Motion Picture Academy museum. I never do this stuff, but Kenneth Branagh’s gorgeous movie is the best one I’ve seen all year and is likely to win many Oscars. How could I say no?

This was an old fashioned premiere, the kind we used to go to before the pandemic. Lots of stars, glamour, and of course, those damned masks. Masks everywhere. They didn’t hurt the experience in any way.

This was the second time I’ve seen “Belfast” after viewing it at the Hamptons Film Festival. (I still don’t understand why the New York Film Festival didn’t have it.) Branagh, famous for Shakespeare and Agatha Christie movies, has finally arrived at his moment. This is his coming of age story during “The troubles” in Northern Ireland in the 70s. It’s the most organic, completely realized film of the year, much like “Nomadland” last year. And it has Judi Dench, in a role that will earn her another Oscar nod. You cannot ask for more.

The highlight of last night’s premiere, besides the movie, was the party trick that should win Jamie Dornan a Best Supporting Actor nomination if not the award itself. The actor best known for the “50 Shades of Grey” series jumped on stage with the terrific house band and sang the R&B hit, “Everlasting Love,” just as he does in the film. It’s one of his many Oscar moments in the film, and in person, it’s a wowser. Women and men swoon equally. May I say he whipped the crowd into a frenzy? Very “Commitments” like.

Dornan told me that he knows how good the movie is, obviously. He’ll do something he’s never done before for Oscars season. “I’m moving my family out here in January,” he told me, from London. They’ll just hunker down to help with the publicity for the film. For Jamie, this is a major career change, a breakthrough that should set him on a very different path now. But this, not “50 Shades,” is what he wanted and hoped for.

“Belfast” is the Irish “Fiddler on the Roof.” It’s everyone’s immigrant story. What do you when the place where you were born is under siege and no longer possible to live in? Branagh is really telling the most relatable story of all. How do you leave people behind to make a better life for your family?

By the way, “Belfast” is studded with beautiful songs almost all by Van Morrison. This is the pre-pandemic anti-lockdown nutso Van. My advice is just forget about the current incarnation of the Irish soul and folk singer. These songs are so wonderful, and fit the mood of the film perfectly. Let’s pretend Van had a brain tumor that altered his reasoning this year. But pre-2020, Van Morrison’s records are gifts from the Gods. And the horn solos are enough to live on.

So here’s a little trivia: there’s an aside in the movie, Jamie’s character is carrying a racing form and someone asks him which horse to bet on. I didn’t hear this in the first screening, but last night I heard him reply, “Moondance.” That’s of course, the most famous Van Morrison song. It would be a good name for a winning horse. And “Belfast” is a winning movie!