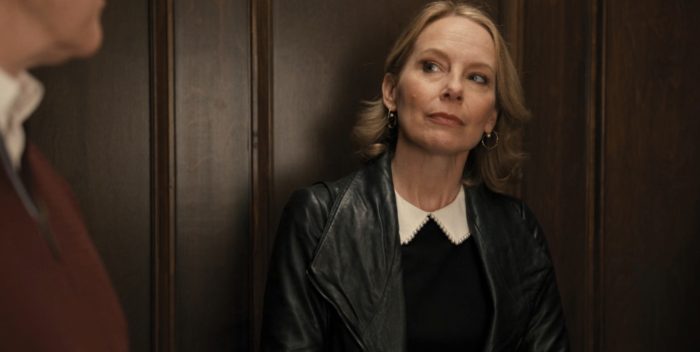 Steve Martin, Martin Short, and Selena Gomez rocked this series. They made for a wonderful crime solving trio at the Arconia on the Upper West Side. I’m nervous for the people who live im the real building– not the Apthorp but another similar set up further up Broadway. The final scene of tonight’s show really gave away the facade.

So the story was that Tim Kono had been killed after witnessing his friend Zoe get shouted off the roof. Nathan Lane’s deaf son did that, and so we thought he had killed Tim, too. But last week Jan the bassoonist, played with gleeful madness by Amy Ryan, had been having an affair with Tim. Her bassoon cleaner was found among his possessions. And tonight, Amy lost it, snapped gloriously and was revealed as Tim’s murderer. All hail Amy Ryan, who will be much missed in season 2. (Maybe they can bring her back.)

Along the way, Sting was a suspect. Tonight, when Jan poisoned Charles (Steve Martin) he floated around the building in a stupor to strains of “Fields of Gold.” It was pretty hilarious. And Sting’s cameo a few episodes ago was the perfect nonsensical sidestep to pad the episodes out.

Nathan Lane already chewed up the furniture in episodes as the deli owner whose son sort of killed Zoe, then he sponsored the main trio’s podcast. But last week Jane Lynch came in as Charles’s stunt double and almost stole the whole show. She was amazing. Jane Lynch just takes whatever show she’s on and makes it her own. (See “Mrs. Maisel”).

The end of “Only Murders” was already a set up for the next season as Mabel is found with the dead body of Bunny, the awful tenant and head of the co-op whom Mabel only minutes earlier called the most hated bitch in the building. A new mystery begins as our trio is taken away by the police.

Steve Martin and Martin Short are well known quantities already, so it’s no surprise how wonderful they’ve been in this series. Short, especially, was sublime. He and Martin are such good pals in real life, and they play off each other like Jack Benny and George Burns. (Short being Benny.)

But the real gem of “Only Murders” is Selena Gomez, who never sang a note. She just segued from Woody Allen’s “Rainy Day in New York” to this Manhattan murder mystery without missing a beat or a note. She has a droll delivery and natural deadpan. You can’t get enough of her.

So we wait now for Season 2, I guess in a year, on Hulu. This series was shot with pauses for commercials. So NBC, which as a stake in Hulu, would be smart to show the series next summer before Season 2 comes. In the meantime, this is reason enough to subscribe to Hulu. I will miss these people!