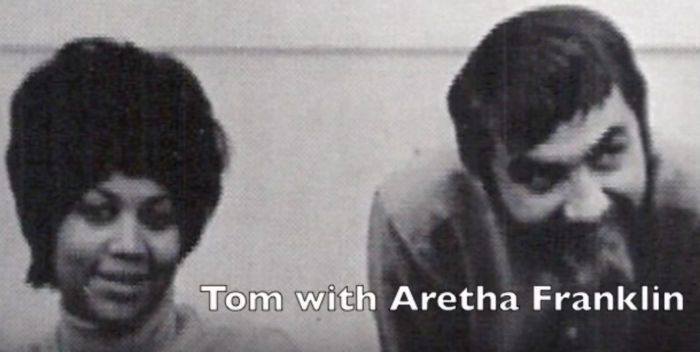 Tom Dowd was one of Aretha Franklin’s three main producers/arrangers at Atlantic Records. But like the great Arif Mardin, he is also entirely scrubbed from the new movie, “Respect.”

Dowd and Mardin worked for and closely with Atlantic Records founder Ahmet Ertegun, a legend in the record business and the man who put Aretha on the map after Columbia Records’ John Hammond made 9 mediocre albums with the future Queen of Soul.

In “Respect,” none of them exist, only Jerry Wexler (in large part, I think, because he left behind a book, “Rhythm & Blues,” that the screenwriter could lift anecdotes from).

This excising doesn’t sit well with the late producer’s daughter. Dana Dowd, who writes on Facebook:
“Not at all knocking the stellar performances of the actors/actresses in this film. It is however very unfortunate that Hollywood relies so heavily on music to assist in making films but does not have the “respect” to properly tell the story of the making of the music when “re-creating” films about an industry and fellow form of artistic expression they rely so heavily on.
P.s. – my father nor Arif were just “Producers” of Aretha’s most well known era but also contributed their engineering and/or arranging skills and conducted the musicians on 99.9% of those songs. Ahmet was co-writer of one of Aretha’s hits (“Don’t Play That Song”). It was also not Jerry Wexler who discovered the Aretha sitting at the piano nuance of her vocal range, but my father. So there is very little historical accuracy yet again.”

Tom Dowd was memorialized in a great documentary easily found on YouTube and Amazon called Tom Dowd and the Language of Music.