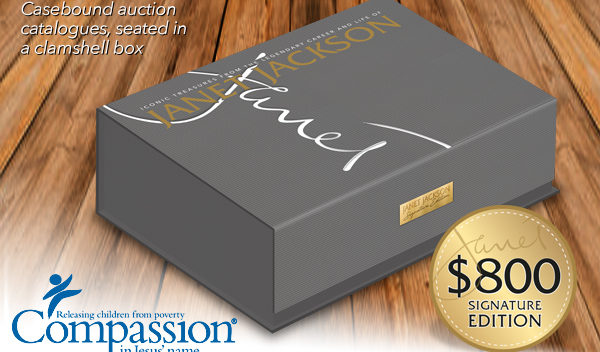 I never heard of a 501 c3 called Compassion International until today.

Janet Jackson’s selling an $800 boxed set for them on Julien’s Auctions. “All proceeds go to Compassion International.” It’s for Jesus, of course!

I’d have a lot of compassion if I made that much money tax free. Hallelujah!

What have you done for me lately? would be a good song for Compassion International. This a big deal money group. They claim to give away over $635 million a year. Of course, not a penny is specified on their Form 990. It’s all vague, big amounts like $19 million to “Sub Saharan Africa.”

None of it makes any sense because their fundraising activities are very pokey. They say they grossed $20 million from 5 events. But their net income from the events is $0.

I don’t know. Unless Janet herself is in the box, I’d think twice about all of this!

The money from the rest of the auction goes to Miss Jackson. No touring this year, you know.

a Helen Storey designed floor-length metallic silver coat worn by Jackson in the 1995 “Scream” music video with brother Michael Jackson… costing $7 million at the time, the music video was listed in the Guinness World Records as the most expensive music video ever made and received 11 MTV Video Music Award nominations that year;
a Richard Tyler black coat with velvet lapels, worn by Jackson on her 1990 Rhythm Nation Tour while performing her hit singles “Control” and “Nasty”;
Jackson’s 17th century ensemble worn while performing “If” on her 1993-1995 Janet World Tour;
Jackson’s outfit worn while performing “Scream” during the MTV Video Music Awards at Radio City Music Hall in New York City in 2009;
her stage costume worn on “MTV Icon: Janet Jackson” show in Los Angeles on March 10, 2001 while performing “All for You”;
a yellow two-piece suit with a red and yellow polka dotted scarf worn by Jackson while performing “Alright” on The Jackson Family Honors TV special that aired on February 22, 1994 and janet. tour;
Janet Jackson’s 2001 “All for You” music video ensemble; her 2001 All For You Tour costume; her 2008 Rock Witchu Tour Atelier Versace red chiffon sequined gown with Versace metallic red platform stilettos; a tan long-sleeve bodysuit with floor-length black fur coat worn by the pop/R&B diva while performing at the Essence Music Festival in New Orleans on July 2, 2010 and more.