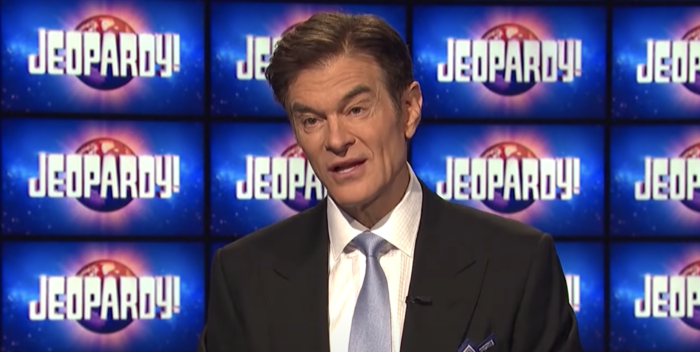 Where the heck is Ken Jennings?

“Jeopardy!” is in jeopardy since Dr. Oz took over as guest host. His second week at the podium sank the venerated game show to 4.9 million viewers. Dr. Oz’s first week was higher by 300,000.

When Ken Jennings took over from the late Alex Trebek in January. he kept the ratings at a steady 6 million. But when Jennings left, Katie Couric came in and numbers started to dip. Couric’s run caused some damage, but Dr. Oz– who the fans petitioned against– has left the show in a precarious situation. In between there was show EP Mike Richards.

Green Bay Packers quarterback Aaron Rodgers is on now, and we won’t know what’s happened with him until next week. But the PR machine issued an interview with Richards yesterday loading praise on Rodgers. That’s a sign they know things aren’t going well. The interview read like an act of desperation.

There are still weeks and weeks to come of guest hosts starting next week with Anderson Cooper, then Bill Whitaker of “60 Minutes.” actress Mayim Bialik, and Savannah Guthrie, followed by Dr. Sanjay Gupta. There’s no plan for Levar Burton, who has a big fan following. It looks like “Jeopardy!” will wait till Labor Day to announce Jennings, or some new permanent host. I wonder if they can wait that long.