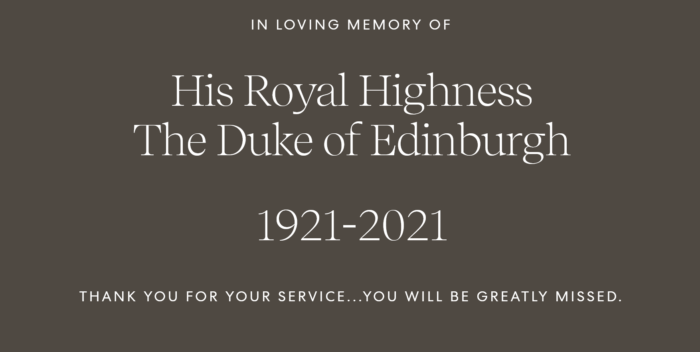 It took a few hours, but Prince Harry and Meghan Markle’s Archewell Foundation has issued a tribute to Harry’s late grandfather Prince Philip.

They took down their website and put up a simple memorial card on their home page.

In loving memory of

His Royal Highness
The Duke of Edinburgh

Thank you for your service…you will be greatly missed.

Prince Harry will certainly fly to London for the funeral, which will not be public because of COVID restrictions. Poor Philip waited 69 years but he can’t have a glamorous funeral. A sad ending.

Meanwhile, “Fox and Fiends” blamed Phil’s death on Harry and Meghan doing their Oprah interview. That he was 99 years old escaped Kilmeade, Doocy and that woman who sits with them. Crazy.

There should be no tears for Philip. He had quite a life. He lived it on his own terms and had a lot of fun. Best gig in history.

It is with deep sorrow that Her Majesty The Queen has announced the death of her beloved husband, His Royal Highness The Prince Philip, Duke of Edinburgh.

His Royal Highness passed away peacefully this morning at Windsor Castle. pic.twitter.com/XOIDQqlFPn