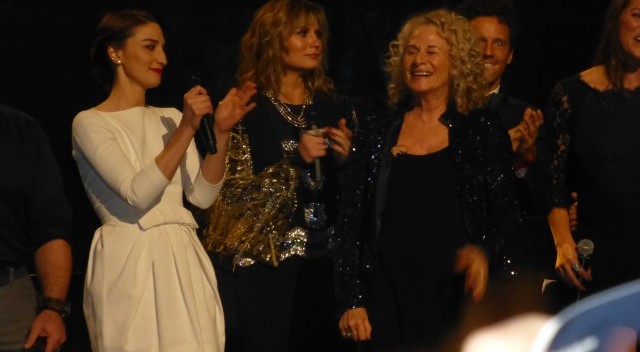 It only took 50 freakin’ years: Carole King was finally nominated to the Rock and Roll Hall of Fame today. It’s the actual 50th anniversary of “Tapestry,” her groundbreaking mega selling album that ushered in the era of singer-songwriters.

The Rock Hall will also also consider Tina Turner, and Dionne Warwick, each of whom has careers going back 60 years. Like Carole, they were all eligible the year the Rock Hall began in 1988. If they don’t all get in now, this whole thing is really more of a joke than we thought.

Other nominees for induction include Todd Rundgren, whose landmark album “Something/Anything” came out in 1972, the New York Dolls, Rage Against the Machine, Foo Fighters, Iron Maiden (haha), The Go Go’s, Devo, and Kate Bush.

Just to make things interesting, they’ve also thrown in Chaka Khan, who’s been on the nominees list many times and should be be in, and Mary J. Blige. The group is rounded out by Fela Kuti, why I do not know.

Jay Z is also nominated even though he has nothing to do with rock, or even R&B, except that he’s sampled a lot of the songs.

Public voting will be strong for Jay Z, Foo Fighters, and Rage Against the Machine. The Rock Hall only has itself to blame for years of neglecting all those groundbreaking women– Carole, Tina, Dionne, and Chaka.

Still ignored is Carly Simon, whose first album was released 50 years ago yesterday and is just as important as Carole and Joni Mitchell as a trailblazer and influence.

Final inductees will be announced in May, and there will be a ceremony somewhere at some time later this year.