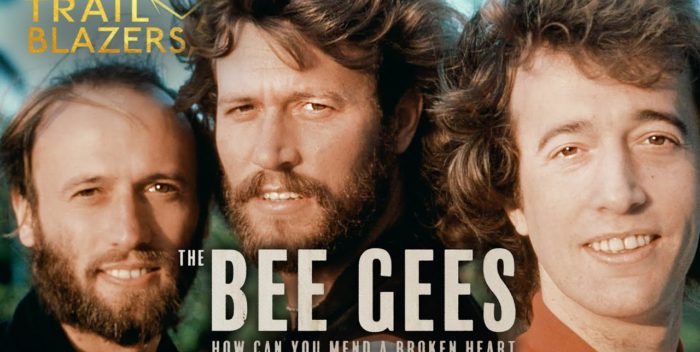 I love the Bee Gees, and Frank Marshall has done an exceptional job creating an emotional documentary about them. “How Can You Mend a Broken Heart?” premieres on HBO on Saturday night. Please, don’t get a fever, if you know what I mean, considering the pandemic.

Barry, Robin, Maurice Gibb moved with their family from England to Australia and immediately became a star act in the making. Their three part harmonies, their ability to write very catchy pop songs with underlying tones of R&B, garnered them local hits as teens, a first number 1 down under, and then a recording contract with Robert Stigwood.

Marshall, the very successful producer of dozens of hit movies including many Spielberg classics, directed this one himself. You can tell it’s a passion project. Barry, the surviving brother, is front and center, but there is plenty of footage and interviews with Maurice and Robin, the younger twins. The brothers were of one mind and voice, making them feel, as Barry says, like triplets.

The Bee Gees saga starts in 1967, when they generate a slew of hits over the next two and a half years. I have a great fondness for that period that includes “To Love Somebody” and “Gotta Get a Message to You.” That period generated a “Bee Gees Gold” greatest hits album that back in the day, everyone had.

But that success ruined them a little bit, and they disappeared for a couple of years. When they returned in 1971, a trio of hits resurrected them– “Run to Me,” “Lonely Days,” and “How Can You Mend a Broken Heart?” But after that run, the Bee Gees really drifted. They had to reinvent themselves. Atlantic Records, where they’d been signed to Atco since ’67, sent them to Miami where Eric Clapton had had a massive career resurgence with producer Tom Dowd making “461 Ocean Boulevard” and “I Shot the Sheriff.” Clapton, on screen, happily takes credit for what happened next.

I’m very lucky to have known producer Arif Mardin*, who reset the Bee Gees career in 1975 with a smash hit album and singles like “Jive Talkin'” and “Nights on Broadway.” Barry Gibb discovered his falsetto, Arif  — a genius–  married it to disco-like percussion and lush, swooning strings. Even though they only made the one album together, it set the Bee Gees up for their 70s disco explosion with a dozen hits culminating in “Saturday Night Fever.”

Marshall tells a complicated story very well, delineating the subsidiary rise and fall of the Gibbs’ younger brother, Andy, who skyrocketed to fame and died young. He also traces the rest of the family, the interplay of the three main siblings’ difficulties with fame and fallings-out. Very smartly, he brings in a couple of other brothers– Noel Gallagher of Oasis, Nick Jonas of the Jonas Brothers– to elucidate the complicated relationships. (Gallagher seems unusually reasoned.)

The film manages to cover almost everything but Marshall omits the Bee Gees’ tremendous failure starring as the Beatles in the “Sgt. Pepper’s Hearts Club Band” movie. At the highest point in their career, the summer of 1978, Stigwood pushed them into this misbegotten project. By ignoring this episode, a key to why the Bee Gees’ suddenly fell into disrepute is missed. It wasn’t just that people suddenly hated disco. The Gibbs looked ridiculous. It was also overkill. “Saturday Night Fever” was still omnipresent, plus they wrote the Frankie Valli sung theme song for the monster Stigwood hit movie. “Grease.” The Beatles project was a disaster that underscored their cultural saturation. The crowd turned against them.

But that’s my quibble. The “Sgt. Pepper” episode, “How Can You Mend a Broken Heart?” is an overdue chronicle and salute to the Gibbs family. For people who know nothing about them, the Bee Gees story is now placed in a proper historical perspective. I loved the engineers and producers like Albhy Galuten who show how they helped create the “Saturday Night Fever” sound. And there are some enlightening thoughts from Chris Martin, Justin Timberlake, music producer Mark Ronson, singer Lulu, and record company executive Bill Oakes, among others.

*PS Arif Mardin is still so undervalued in the history of 70s R&B. You can draw a line through the remarkable records he created. Listening to the Bee Gees’ “Fanny (Be Tender with My Love),” you can hear that it’s descended from Arif’s “She’s Gone” with Hall & Oates. His many masterpieces include the Roberta Flack and Donny Hathaway album. Arif, we miss you!

One more note: The Gibbs wrote many hits for other artists, and many of their songs have been covered. One song in particular, “To Love Somebody,” is literally a standard in the R&B songbook. Here’s my favorite version, by the late great James Carr.