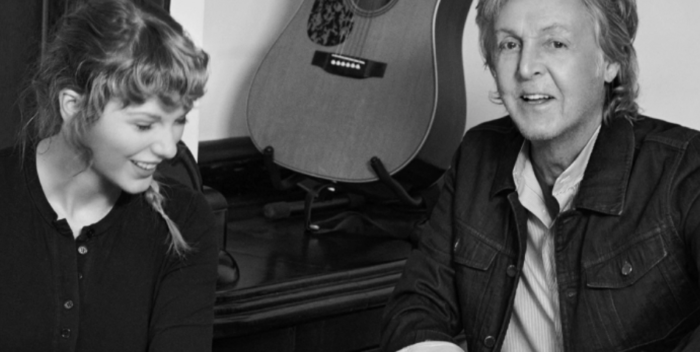 Paul McCartney and Taylor Swift actually interview each other for Rolling Stone this month, and it’s an extraordinary open dialogue. In principal it’s to promote McCartney’s new “McCartney III” album, which he made in lockdown. But the two stars, young and older, talk about making albums from scratch during the pandemic. Swift produced “Folklore,” the biggest selling album of this year, last winter.

The conversation, for each of them, is eye opening. Swift fans will grab onto the singer’s observations about her love life. McCartney says she’s written a lot of break up songs. She replies, “I did until I got lucky.” That’s with British actor Joe Alwyn. It does seem that Taylor is living quite happily in London with him. She observes that all her friends are getting pregnant, and that she’s making stuffed animals and so on. (Hmmmm….)

But it’s McCartney who is incredibly and unusually open. One thing puzzles me, he says he learned to play guitar with his right hand. But everyone knows that McCartney plays leftie. So that may have been error of speech. (There is almost no copy editing in this article. All grammatical mistakes are left in.)

McCartney says that COVID reminds him of World War II. (He was born in 1942 and the war is a large part of his thinking.) He says, “[There are] a lot of parallels with the virus and lockdowns and wartime. It happened to everyone. Like, this isn’t HIV, or SARS, or Avian flu, which happened to others, generally. This has happened to everyone, all around the world. That’s the defining thing about this particular virus. And, you know, my parents … it happened to everyone in Britain, including the queen and Churchill. War happened. So they were all part of this thing, and they all had to figure out a way through it.”

To that extent he recalls the women who inspired “Eleanor Rigby”:I love the idea of writing a character. And, you know, trying to think, “What am I basing this on?” So “Eleanor Rigby” was based on old ladies I knew as a kid. For some reason or other, I got great relationships with a couple of local old ladies. I was thinking the other day, I don’t know how I met them, it wasn’t like they were family. I’d just run into them, and I’d do their shopping for them…It just felt good to me. I would sit and talk, and they’d have amazing stories. That’s what I liked.

“They would have stories from the wartime — because I was born actually in the war — and so these old ladies, they were participating in the war…so I would think of her and think of what she’s doing and then just try to get lyrical, just try to bring poetry into it, words you love, just try to get images like “picks up the rice in the church where a wedding has been,” and Father McKenzie “is darning his socks in the night.” You know, he’s a religious man, so I could’ve said, you know, “preparing his Bible,” which would have been more obvious. But “darning his socks” kind of says more about him. So you get into this lovely fantasy. And that’s the magic of songs, you know. It’s a black hole, and then you start doing this process, and then there’s this beautiful little flower that you’ve just made. So it is very like embroidery, making something.”

Anyway, it’s quite a read. Congrats to Rolling Stone. Also on the RS site this week is a very detailed, insightful piece by David Browne about the dire situation in the world of touring. The crews are suffering. It’s a knockout piece of reporting.