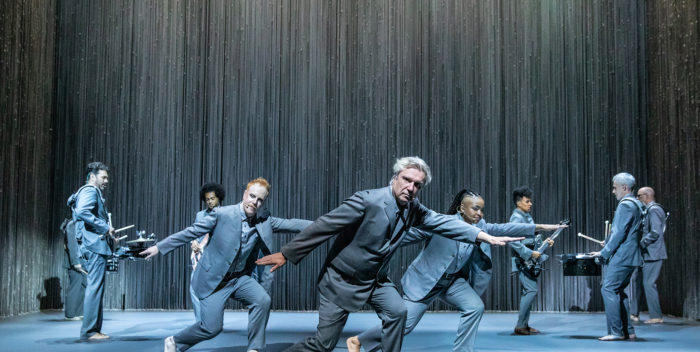 The best movie of 2020, David Byrne’s “American Utopia,” hits HBO tonight at 8pm Eastern. You can’t not watch it. Spike Lee loved the Broadway production so much he asked to direct the movie version, and he has done it very well. Ellen Kuras, such an extraordinary talent, created a cinematographic beauty. The show was a massive hit on Broadway last year, so the Tony nominations this week ignored it. That’s how you know it’s good.

When I saw David Byrne’s “Here Lies Love” at the Public Theater it was a mind blower, of course. A work of sheer genius in its staging and execution. The songs were all new, nothing from the Talking Heads, and still it carried the audience– many of whom, like me, who were running, moving, shifting — into a new dimension. But this was not new for Byrne. I was there at Radio City Music Hall when he brought African musicians onto the stage November 2, 1980– this was years before Paul Simon’s “Graceland” — for the Fear of Music tour. I remember standing for the whole show (I was a lot younger) as “I Zimbra” enveloped the famed theater.

You can draw a direct line from that Radio City show to “American Utopia.” The latter show is 40 years in the making, really. Byrne was a precocious 28 years old at that show (I was 6) but the genius was fully formed. That show included “I Zimbra” — already more than a year old, as well as “Life During Wartime (This Ain’t No Disco)”– and the then already classic “Once in a Lifetime.” When I look back at that set list I see that Byrne still didn’t know how good “This Must Be The Place” was, and hadn’t yet given into the hit potential of “Burning Down the House.” Back in 1980, everything David Byrne was an oddity, a cult hit, not yet a commercial entity.

How funny to think of that as he prances across the “American Utopia” stage barefoot, leading his band of dancers, singers, and musicians in songs that you couldn’t imagine in 1980 would become standards. I remember waking up to WBCN in 1977 and hearing “Don’t Worry About the Government,” one of all my time favorites, for the first time. He’s singing about what? Apartment buildings? Convenience? With a robotic metal sounding voice that was somehow still soulful, the song unravels into a majestic poem.

And there you have the beautiful dichotomy of a David Byrne composition: it’s bitter and sweet, dancing and architecture. Human facing the unknown anonymity of life during wartime, or a pandemic, and you know we’ll get through it.

I’ll be there at 8pm tonight, my building has many conveniences. Let’s blow out HBO’s servers.

PS If you miss going to museums, this is also the best art installation of the last century.