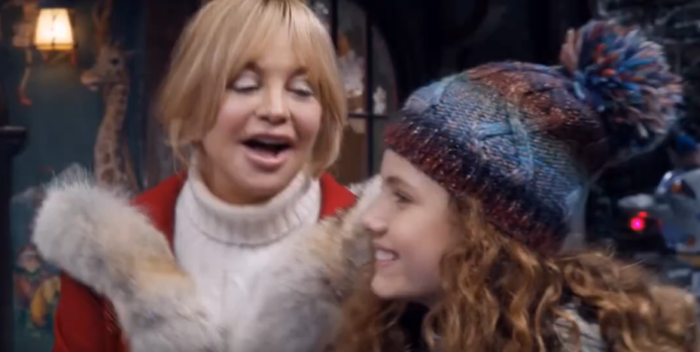 Two years ago, Kurt Russell played Santa Claus in “The Christmas Chronicles” on Netflix. It was a big hit. His step son Oliver Hudson was the male lead, father of two charming children who got into all kinds of mischief. Toward the end of the movie, Goldie Hawn, Oliver’s mother and Kurt’s life partner, made a cameo appearance as Mrs. Claus.

So you’d think for the sequel, coming November 25th, they’d all be back. But Hudson is missing from the cast list and the credits. He’s out.

Couldn’t they get him for a decent price? No, it looks like his character may have been fed to the wood chipper during the intervening time. His wife (Kimberly Williams Paisley) now now has a boyfriend played by Tyrese Gibson, who comes with a little boy of his own.

And Oliver? He’s starred in many TV series, so he’s fine, he has a very nice career. But even with your parents playing Mr. and Mrs. Claus, casting has changed considerably these days.

The good news is that maybe Goldie, who doesn’t work a lot, has a much bigger role as Mrs. Claus. Anything with Goldie Hawn is really gold.

Meantime, Netflix just sent me a list of Christmas movies that looks to rival Hallmark’s humongous slate of holiday offerings. Like Hallmark, they’ve found a bunch of actors willing to take paychecks in exchange for appearing in wholesome family fun! One of them, called “Jingle Jangle: A Christmas Journey” has a cast that includes — are you ready? –Forest Whitaker, Keegan-Michael Key,  Phylicia Rashad, Anika Noni Rose, Ricky Martin, and Hugh Bonneville. That is insane!

Still no “Home for Chanukah” but the irony of “The Christmas Chronicles” is that Goldie is Jewish! Maybe Mrs. Claus reveals that in the sequel! Spin that dreidel!