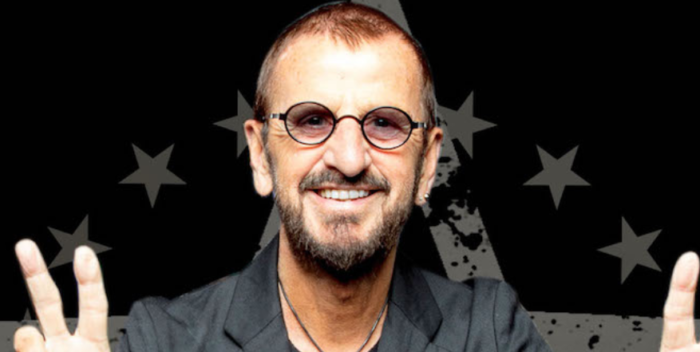 Ringo Starr is going to celebrate his 80th birthday BIG.

He’ll stream a live charity show on July 7th featuring bandmate Paul McCartney, brother in law Joe Walsh, and a slew of stars including Gary Clark Jr, Sheryl Crow, Sheila E and Ben Harper and more. They’ll be shown in home movies and rare concert footage. It’s unclear if any of them will be performing live.

“As everyone knows I love gathering with fans for peace and love on my birthday. But this year, I want everyone to be safe at home –  so I called up a few friends and we put this Big Birthday Show together so we could still celebrate my birthday with you all, with some great music for some great charities. I hope you will all join me! Peace and Love, Ringo.”
The broadcast will also feature the premiere of a guest star version of a song I really love– Ringo’s “Give More Love.” The video was created to benefit Musicares and features Jeff Bridges, Jackson Browne, T Bone Burnette, Elvis Costello, Rodney Crowell, Steve Earle, Peter Frampton, Ray Wylie Hubbard, Kenny Loggins, Michael McDonald, Keb Mo and Willie Nelson.
Additionally there will be a playlist of unique tribute performances on Ringo’s YouTube channel. This will include musicians who have previously recorded Ringo’s songs, performances from past birthday celebrations as well as some new versions which artists will be posting on their socials.  Look for musical tributes from Ben Folds, Ben Dickey, Bettye LaVette, Colin Hay, Elvis Costello, Gregg Rolie, Judy Collins, Peter Frampton, Richard Marx, Steve Earle, Steve Lukather and many more.
Ringo loves to celebrate his birthday. I was lucky enough to attend his 70th birthday celebration at Radio City Music Hall. For some reason, he doesn’t look like he’s aged a decade. It’s all that good livin’, peace, and love.
More info to come…