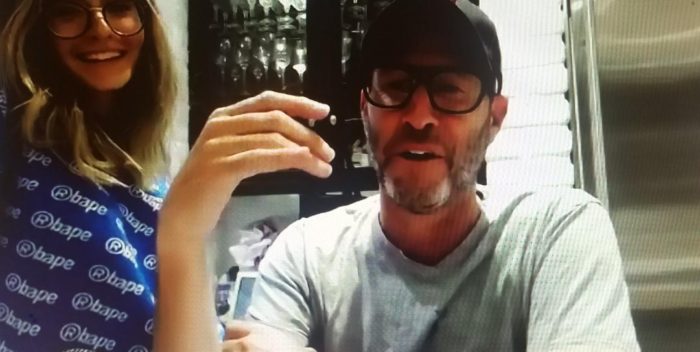 Quarantunes started out as a little fundraiser. And now, after 12 weeks of presenting rafts of star performers on Zoom to donors, the charity has announced they’ve raised $5 million.

Quarantunes is the brainchild of WME super agent Richard Weitz and his 17 year old daughter, Demi, who’s on her way to big things. With mega music mogul Clive Davis bringing performers, the Weitzes have turned the invitation only Quarantunes into a cult phenomenon.

Tonight, as their four hour extravaganza was coming into the home stretch, Weitz announced that next Friday, June 27th, Quarantunes will showcase the original cast of “Hamilton” starring Lin Manuel Miranda and all of the great stars from that show. “I’m not saying they;ll all be singing but…”

The money goes to Big Brothers and Sisters of Los Angeles. All of it. If you want to watch, you’ve got to donate.

Tonight, Friday, Clive presented Art Garfunkel, and Melissa Manchester, each of whom sang and was spectacular. Garfunkel sang with his son, James, in perfect harmony. Manchester, who we don’t see enough of, performed her hits “Midnight Blue” and “Don’t Cry Out Loud.” The songs’ co-writer, Carole Bayer Sager, was kvelling on the Zoom.

And that was just the tip of the iceberg. As I type this, El DeBarge is doing his 80s hits. Faith Evans joined him for an impromptu “I’ll Be Missing You” and “Who’s Johnny?” It was really wonderful, all spur of the moment. Evans worried that she was wearing a bandana, t shirt and jeans, but that’s what made it so great. After some kidding around and prodding, Evans and DeBarge put together a scrappy version of Diane Warren’s “Rhythm of the Night.”

Singers from the groups Asia and The Outfield performed their 80s hits, and Chloe x Halle– who must think the 80s were in the pre-historic era– sang their new release. They have lovely voices. Aloe Blacc chimed in with his hits (and introduced his cute kids). Sherry Lansing, Diane Warren, Jimmy Jam Harris were in the “audience” as well as Nikki Haskell, Debbie Gibson and Lisa Loeb. SiriusXM’s Tracey Jordan helped coordinate the talent as usual.

The Weitzes put on intimate evenings that are unlike anything else on the Zoom or the web. The artists sing live, play piano or guitar, accompany themselves. They stop and start until they’ve got it right. And somehow 400 people feel very intimate. The party list isn’t all stars either, but people who’ve heard about the event and want to donate to Big Brothers and Sisters.

By the way, the real surprise of this night was Bryan Adams, from Canada, who played a song he co-wrote a decade or more ago called “Never Gonna Break My Faith.” It was for Emilio Estevez’s movie, “Bobby,” and sung by Aretha Franklin and Mary J. Blige. It was nominated for an Oscar. Last week, Adams found Aretha’s solo recording of the song on his computer and called Clive. The result was Davis getting RCA and Peter Edge to make a new Black Lives Matter video for the track, which you can watch here:

Quarantunes returns next Friday with “Hamilton” and Saturday with a Pride show.