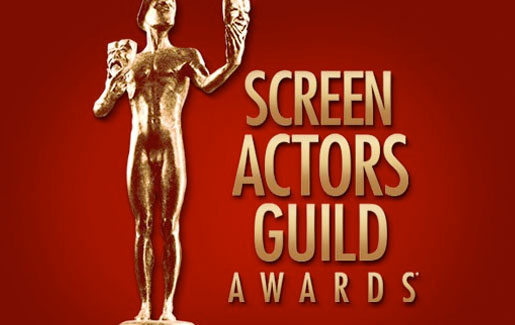 UPDATE: “Parasite” won Best Cast Ensemble, the first foreign film ever to win the SAG Award. Little Neon Films distributed it. Now the Cannes Film Festival winner will go to the Oscars in lead against Golden Globe winners “1917” and “Once Upon a Time in Hollywood.”

The four actors who won tonight will take the Oscars in three weeks: Joaquin Phoenix, Renee Zellweger, Laura Dern, and Brad Pitt. The only movie not nominated here, “1917,” will take on SAG’s winner for cast ensemble, “Parasite.”

The SAG Awards got off to a great start tonight with Eugene Levy and his son, Dan Levy, from “Schitt’s Creek” kicking it off with a hilarious sketch. Bodes well for the evening. Winner of Best Ensemble for film is a good indicator of the Oscar.

Sort of funny when you realize that if even if Al Pacino and Robert De Niro get nothing for “The Irishman,” they also appeared in other hit films. De Niro is  in “Joker” and Pacino is in “Once Upon a Time in Hollywood.” All good!

8:32pm: The “Parasite” cast gets a standing ovation from the audience. This is amazing. Maybe they’ve won Best Ensemble.

Male Actor, Movies, Supporting Role: Brad Pitt, for “Once Upon a Time in Hollywood” Quote: “Quentin Tarantino has separated more women from their shoes than the TSA”

Female Actor in a Drama Series: Jennifer Aniston! for “The Morning Show” (good for her!)