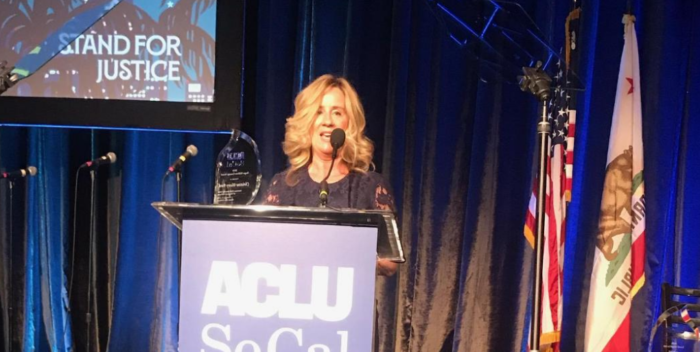 Christine Blasey Ford, who accused Supreme Court Justice Brett Kavanaugh of a sexual attack when they were young, was surprised tonight at the annual ACLU dinner in Los Angeles. At their Bill of Rights dinner, Judd Apatow presented Ford with a special award. It was a total surprise to the audience, and kept quiet because of security concerns.

When Apatow introduced her to the star studded crowd, the audience went wild, giving her a standing ovation.

She told the crowd: “I underestimated the machine against me, but I also underestimated my support.” She received 200,000 emails and handwritten letters. “That’s why it’s so important that the ACLU is in the forefront of this movement against sexual violence against women and to speak up for the victims.”

It was Ford’s brave testimony earlier this year that held up the approval by the Senate of Kavanaugh for the Supreme Court. Even though he got the appointment, Ford was widely believed by most of the country and the non Trumpers in Congress.