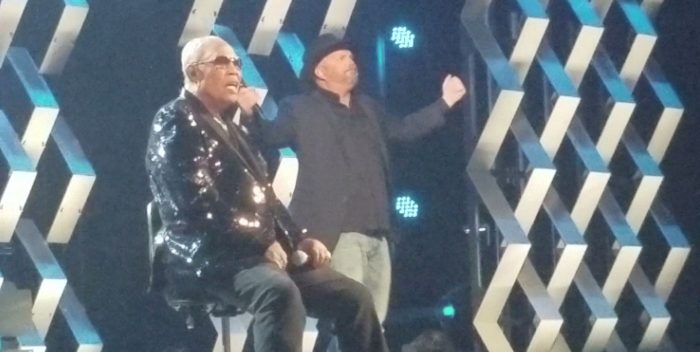 It was a grand night for the Grammy Awards’ 2019 Lifetime Achievement Award winners. A slew of stars showed up at the Dolby Theater in Hollywood, where the Oscars take place, to tape a PBS special for this fall featuring Garth Brooks and Soul Man Sam Moore (who lit the theater up), Dionne Warwick, George Clinton and Parliament- Funkadelic, famed songwriter Valerie Simpson, and 93 year old composer Johnny Mandel.

It was a colossal achievement that no one would miss, right? But Julio Iglesias was AWOL, sending just a video instead of showing up and collecting his prize. And the new head of the Grammys, Deborah Dugan, whom everyone was hoping to meet, couldn’t make it out from the East Coast.

The most egregious absence of the night was Ozzy Osbourne, whose group, Black Sabbath, was honored. Neither Ozzy–who’s been ill– or Sharon Osbourne were present. To make matters stranger, the members of Black Sabbath who did show up didn’t mention the Osbournes at all. They’re obviously angry that the Osbournes ended the band in 2017.

Regardless, the people who did show up were much more important. There are many highlights that you’ll see this fall starting with Sam Moore and Garth Brooks’ duet on “Soul Man” and “Hold On I’m Coming,” but even better, Sam’s solo outing on “I Can’t Stand Up for Falling Down.” Recovering from back surgery, Sam performed from a stool center stage and brought the audience to their feet. His voice soars still at age 83.

Garth, by the way, loves Sam so much he flew up from Nashville specially to be at the show. He had to get right back when he was done; Trisha Yearwood and the kids were waiting for him to celebrate Mother’s Day.

Late star Donny Hathaway must be smiling in heaven as his daughters, Lala and Kenya, are sensational honoring their dad. Donny Hathaway’s political-tinged R&B was actually a forerunner of Marvin Gaye’s “What’s Going On.” Everyone should spend the summer listening to his music, getting ready for this special.

The taping last night was Grammy chief Neil Portnow’s swan song after a long and illustrious career keeping the ship on course for the Recording Academy. He will be missed, but he goes out on a high note with this last project.

When “Grammy Salute to Music Legends” does air, don’t miss it. There was a wonderful vibe in the audience last night, a mixture of the inductees’ families and music lovers. It’s a very warm evening with a  lot of laughs and some tears.

PS I’ll have a full review this fall when the special is all put together.