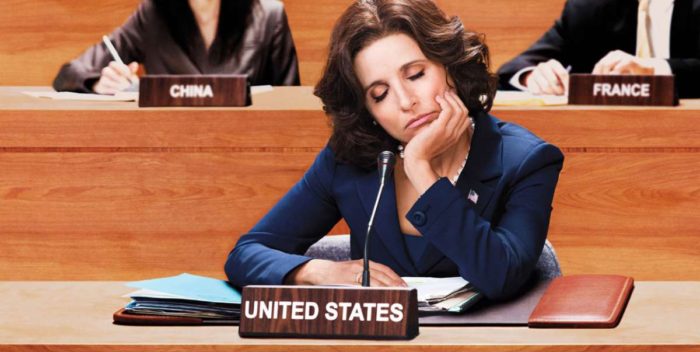 There were a few non-cast members last night at HBO’s swanky final premiere of “Veep” last night in New York. Rather than take the screening audience to a fancy second venue like Tavern on the Green, the cabler– now under the reign of Bob Greenblatt– stayed at elegant Alice Tully Hall, which was dressed up like a political convention.

Lena Dunham was one of the non-Veeps, but so too was a familiar, friendly face: former Senator Al Franken. He hasn’t been getting out so much anymore, but everyone was happy to see him. I asked him if he had plans for a political comeback? (He was a rising star in the Senate until the #MeToo movement got him, as well as unliked NY Senator Kristen Gillibrand.)

Franken gave a sheepish grin at first, which may have been more melancholic than revealing. Then he said it: “No time soon.” Too bad. Maybe he’ll make an appearance in “Veep.” It would be so meta. The comedy, by the way, is funnier than ever. It returns on Sunday at the ghastly time of 10:30pm. The premiere, I’m told, was a lot of fun. But the screening in Alice Tully, according to reports, had six empty rows in the back. Very Selina Meyer.

This is HBO’s time of the year, that’s for sure. Next week they premiere “Native Son” and the week after is “Game of Thrones.” Plus “Barry” is coming back. That’s a winning hand.