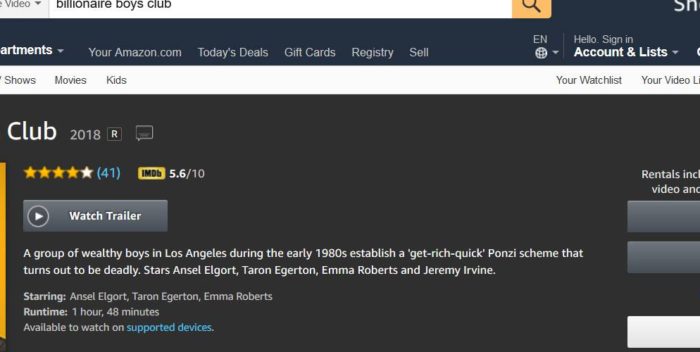 Kevin Spacey’s last movie, a remake of “The Billionaire Boys Club,” has been dumped ahead of its theatrical release on Amazon Prime and other video services.

The film was supposed to be released by Vertical Entertainment, the same company that gave us the huge flop “Gotti” earlier this summer. It still has a release date of August 17th.

But today “The BBC” just turned up on Amazon.

Spacey plays Ron Levin, who was murdered in a Ponzi scheme gone wrong from the 1980s. Ansel Elgort plays Joe Hunt, who organized the Ponzi scheme and the murder. The saga was first turned into a book and then a TV Movie starring Ron Silver and Judd Nelson.

So far “The BBC” is sporting just reviews, both negative, on Rotten Tomatoes.

Vertical’s next release is a documentary about Harvey Weinstein.

Spacey, whose career has been destroyed by scandals regarding sexual misconduct, has no more movies in the can. He hasn’t been seen in seven or eight months since “Rent” actor Adam Rapp accused him molestation as a teen. Since then Spacey has been the subject of lawsuits and accusations from a variety of men alleging misconduct. He was replaced with Christopher Plummer by Ridley Scott for “All the Money in the World.”