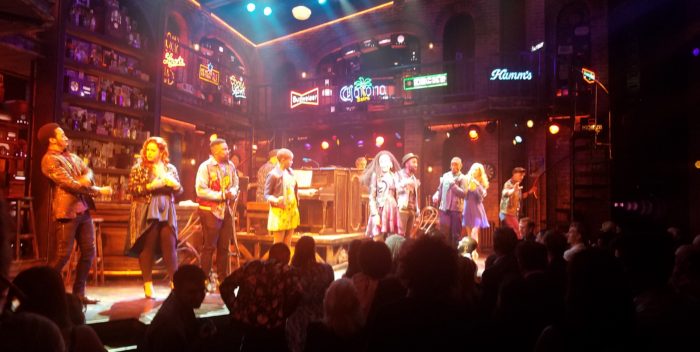 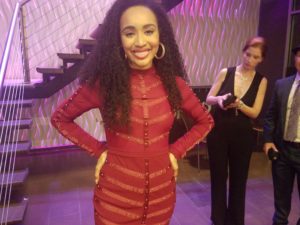 Jerry Lieber (now deceased) and Mike Stoller were the heavy hitters in the Brill Building. Alongside Carole King and Gerry Goffin, Neil Sedaka and Howard Greenfield, Neil Diamond, Cynthia Weil and Barry Man, Lieber and Stoller penned a huge catalog of hits with and for Ben E. King, the Drifters, Elvis, and so on.

Tonight their 24 year old Broadway revue, “Smokey Joe’s Cafe,” was revived in New York for the first time. This version is off Broadway, at what used to be called the Little Shubert, now Stage 42. It’s a big deal. Philip Smith, head of the Shubert Organization, was there. So was Stoller, 85 years young, and his singer-songwriter wife Corky Hale. Plus, people came who worked on the original show, like actor Michael Park, and many of the musical directors. I also finally got to meet a great Broadway performer, Christina Sajous.

The revival is a home run. Do not hesitate to see it right. The nine main performers are superb, each one a star waiting to happen. Jelani Remy, a former “Simba” in “The Lion King,” nearly steals the show with “Jailhouse Rock.” But Nicole Vanessa Ortiz is absolutely sensational on “Hound Dog” and “Fools Fall in Love.” Dionne D. Figgins makes Aretha Franklin proud with “Spanish Harlem.” You don’t want to miss John Edwards’ dramatic reading of “I Who Have Nothing.” Alysha Umphress is the group’s Adele. Dwayne Cooper has a magnificent bass baritone perfect for doo wop and R&B.

There is no “book” per se. Joshua Bergasse sets up little narratives in each song, so that Lieber and Stoller’s intent is realized whether it’s a hit or a rediscovered gem. What really comes across– just as in “Beautiful”– that these songs have stood the test of time. You needn’t be contemporaneous to them to enjoy their magnificent melodies and lyrics. Frankly, this show comes at the right time.  A little Love Potion Number 9 always works its magic.