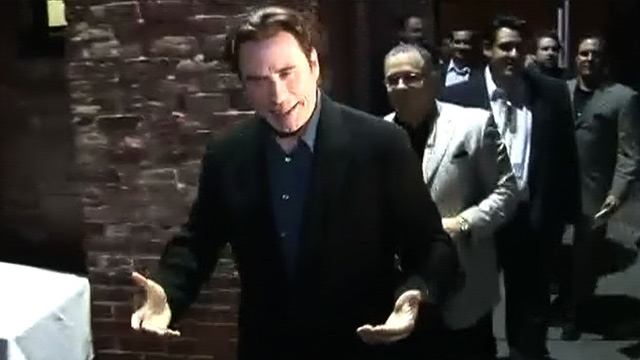 The long awaited “Gotti: In Search of My Father” debuted in Cannes last night, simultaneous to the “Star Wars” premiere at the Palais on the red carpet.

Alas, press was only invited to the glamorous after party at the Hotel du Cap Eden Roc and not to the screening itself, which was for the cast, distributors, and friends of the production. It was the reverse of a lot of premieres.

So up the red carpet went John Travolta, accompanied by the “Gotti” gang, sort of piggy backed onto the “Solo” premiere. It was a little like having two weddings at the same time in a catering hall. The “Gotti” guests then rolled off to a smaller screening room in the Palais. But they got their important moment of international promotion.

John Gotti Jr. was pleased. The movie is based on his life and the book he wrote about his infamous father. He saw the  finished film last night for the first time and gave it its benediction. “It’s very hard to see your life up  on the screen,” he told me, but he’s very happy with star Travolta.

He’s got to be happy with the producers– mostly Edward Walson– who flew in 50 Cent to perform for the formally attired guests at the DuCap. There’s nothing better than seeing rich, black tie and gown guests waving their arms and dancing to X rated rap by a pool on the Mediterranean. And actually, 50 Cent was great musically– he also said that he came because he was such a fan of Travolta’s work in “Pulp Fiction.”

Gotti Jr– who is soft spoken and very friendly– told me as a federal felon who served 10 years in prison it took him two weeks to his passport for this trip. “We only got approved on Saturday,” he said. He came alone, with just a pal, wife and kids left at home. Even his famous sister Victoria Gotti hasn’t seen the movie yet.

Meanwhile, Variety’s international edition gave Travolta some cooked up award– Icon of the Century– and the actor who rose to fame on “Saturday Night Fever” was very gracious. He wore a flowing mane of hair, and  sported a Clark Gable mustache. He was also wearing what looked like a velvet tuxedo with a “puffy shirt” and 17th century sleeves that billowed out of the jacket cuffs.

“You may wonder why I’m dressed this way,” he told the crowd, and then explained it was a tribute to an outfit he’d seen Warren Beatty wear in “Shampoo” 40 years ago.

Travolta brought his family, including daughter Ella, who sat on an outdoor couch and studied her phone during the proceedings, and seven year old son Ben, who eschewed formal wear for beach togs (it was after midnight) and bounced on he same couch trying to get his older sister’s attention.