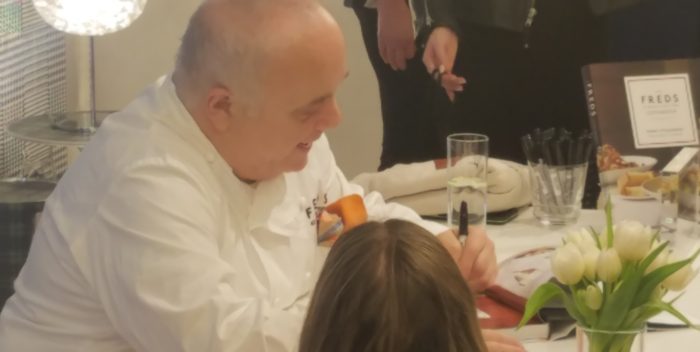 It’s Saturday morning in Manhattan. For many that means preparing for brunch or a late lunch at Fred’s at Barney’s, the hottest spot in town for eons.

We owe Fred’s to the late Fred Pressman, the man who launched the real Barneys dozens of years ago downtown. The restaurant is named after him. But the rest of it– the food, the look, the buzz– belongs to Mark Strausman.

Once the chef at Pino Luongo’s celebrity haunts like Sapore di Mare (in the Hamptons) and Coco Pazzo, Mark left in the 90s and started his famous restaurant on East 21st St. and Broadway called Campagna. Sleek, comfortable and beige, Campagna quickly caught on as the favorite of tons of A listers and was a particular favorite of record biz chieftains. This was when there was a record biz. On most nights, you had to fight your way into Campagna, where Tommy Mottola and Mariah Carey were regular customers.

After Campagna closed, Mark was lured to Barneys in 1996, and the rest is history. There’s a Fred’s here, downtown at the new old store (or the old new store) and Chicago and one in Beverly Hills. On Tuesday night, a gang of notables gathered on the 9th floor of the main store to celebrate Mark’s first cookbook, The Freds at Barneys New York Cookbook, co-written with Susan Littlefield.

It doesn’t seem possible that Mark will let other people try making his sensational french fries, mouth watering chicken soup, or any of the other staples that bring the fans. But the book is so beautiful I’m just going to look at the pictures, read the stories, and then grab a Via to 60th and Madison. On Tuesday night, just access to these recipes brought out Al Roker, Broadway producer Jean Doumanian, famed designer Vera Wang, Fox 5’s Rosanna Scotto, designer Lisa Perry and husband Richard Perry (who owns Barneys) and about a hundred other Upper East Siders who wanted to learn if they could make the bolognese sauce at home.

Will we get it? Study this book. Mark says his cooking his for a “neighborhood coffee shop” and I realize he’s right– and that’s why it’s so popular has lasted so long. It’s comfort food on the highest level.