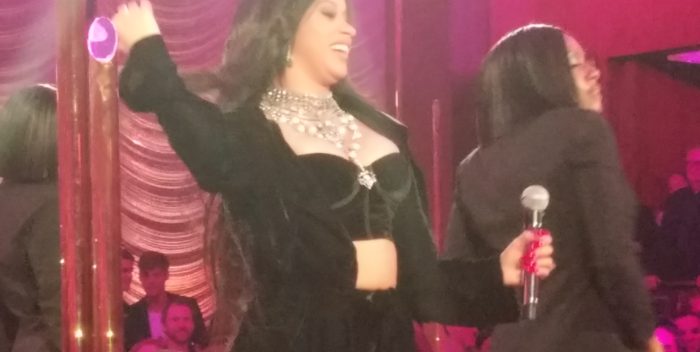 It’s Cardi B’s world right now and we just live in it.

The stripper turned rap star with a heart of gold has finished the week at number 1 on the charts with her debut album.

“Invasion of Privacy” sold 254,00 copies according to BuzzAngle and hitsdailydouble.com. More than half of the sales came from streaming. Cardi B ‘s CDs plus digital downloading came to 105K.

Born as Belcalis Almanzar, the performer can attribute her success this week to a lot of things including co-hosting with Jimmy Fallon on the Tonight Show. Fallon has proven to be a good venue for music sales.

She also appeared on “Saturday Night Live” the day after her release last week and revealed that she is quite pregnant. The total PR package worked like a charm.

IN addition to the number 1 spot on Album Sales, all of Cardi B’s singles are on the top 30 streaming songs chart. Her album is currently number 3 on iTunes. On the singles chart, however, she’s been usurped by her predecessor in rap royalty, Nicki Minaj.