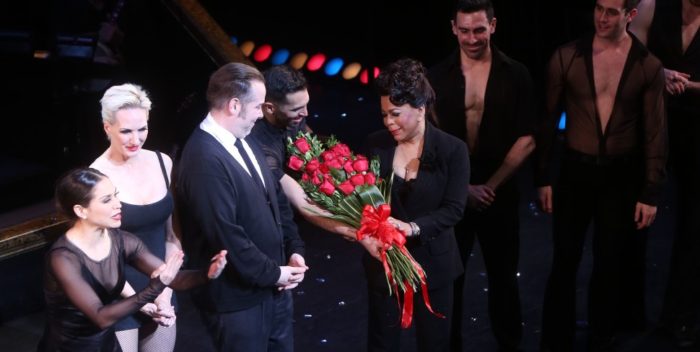 Valerie Simpson is best known to everyone as one half of Ashford and Simpson, the songwriting duo of Motown fame who composed songs like “Ain’t No Mountain High Enough” and “You’re All I Need to Get By.” They also wrote (and sang) “Solid (As a Rock)” and “Reach Out and Touch” and “I’m Every Woman”and…you get the picture.

This month, though, Val is making her Broadway debut as Mama Morton in “Chicago.” She’s killing it, naturally, because what people don’t know is she is a remarkable singer on her own. Since husband Nik Ashford passed away much too soon in 2011 at age 70, Valerie has been incrementally amping up her solo career as well as running their popular Upper West Side spot The Sugar Bar. Last night I caught Val in “Chicago,” and then followed her uptown to the bar where she held court for two hours. Insane!

Last night’s “Chicago” was an event anyway as it turned out one of its former stars, Charlotte D’Amboise, was back in the cast as an unadvertised replacement in the lead role of Roxy. What a treat!

Valerie has never been on a Broadway stage before. She told me credits Clive Davis and the late Maya Angelou for attempting this latest super feat. “I went to a party Clive Davis had last summer where Alicia Keys was supposed to perform but couldn’t make it at the last minute.” she told me. “When I got there he asked if I’d play a couple of songs for his guests. So we did, and when it was over this man came up to me and said, I see you as Mama Morton. That was Barry Weissler, the producer.”

Simpson says Weissler stayed on her all night and started calling the next day. Simpson thought he was crazy. But she remembered a shopping spree she’d been on in Saks once with Maya Angelou, whom she and Nik Ashford had been close friends with. “We were in the store and a man came up and got all excited. He said, ‘Maya Angelou! Maya Angelou! Are you here alone? Do you security? And I [Simpson is about five-foot-1 on a good day] said, very boldly, I’m her security!’ And the man backed off. I thought, if I could convince him that I was Maya Angelou’s security, I can pass myself off on Broadway!”

And so she does, performing Mama’s too big songs– “When You’re Good to Mama” and “Class” with soul and aplomb. She also handles her acting chores like a pro, even though she had just nine days of rehearsal. “Chicago” runs two and a half hours, and Simpson is on stage or nearby for the whole show. Which is why it’s more unbelievable that last night, after the curtain came down, she took us up to the Sugar Bar for weekly open mic night. In a matter of minutes she was sitting by the stage in the tiny, packed club providing harmonies for a bunch of semi-pro singers.

“This is my real home,” she said, while a parade of quasi strangers took the stage. One of them was better known to her: Chaz Lamar Shepherd. When Simpson announced to the regulars at Sugar Bar she was going into “Chicago,” Shepherd– a host at the Sugar Bar– told her, “I don’t know how but I’m going to be in that show, too.” Shepherd, she says, auditioned for the Weisslers and immediately got cast as Billy Flynn. Now, they’re on stage together every night. Small world! And Shepherd is magic as the tuxedo’d defense lawyer of Roxy and Velma. I thought so even before I heard that story.

Meanwhile, business at “Chicago” is booming. The show– which opened 21 years ago– saw a sudden surge last week of 9 percent. Last night it was sold out. What the heck? Hasn’t everyone seen “Chicago” by now? Well, not with Valerie Simpson. Not counting Christmas week, it was the show’s best week since April 2017. Well, maybe it has something to do with Simpson. The show is solid as a rock again. Outside the theater, Valerie was surprised to find the Weisslers gave her her own starring poster– with prominent placement. “And I was like, I’m just a girl from the Bronx!” she said.