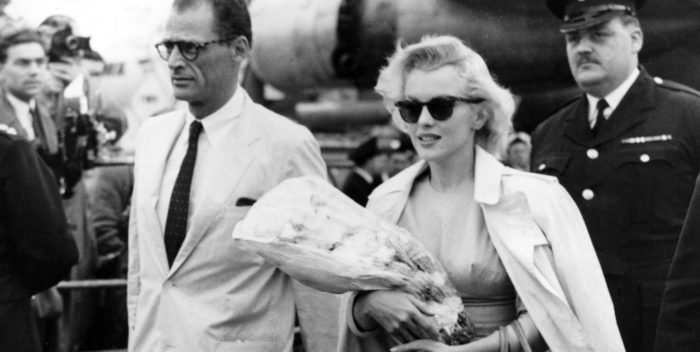 You have to give Rebecca Miller a lot of credit. A respected writer and director (“Maggie’s Plan”) the younger daughter of famed playwright Arthur Miller has lived through a lot. By the time she came into the world in 1962, her father already had two adult children and had been married to Marilyn Monroe, and won the Pulitzer Prize for “Death of a Salesman” and three Tony Awards for Best Play. Rebecca’s mother, Miller’s third and last wife, was famed photographer Inge Morath.

Now, some 13 years after her father’s death (her mother is also gone), Rebecca Miller — who’s been married to double Oscar winner Daniel Day Lewis since 1998, with whom she has two sons– has directed a stunning documentary called “Arthur Miller: Writer.” It addresses everything– Miller’s marriages, divorces, his plays, and even a son no one knew about, Rebecca’s brother Daniel. He was born in 1966 with Down syndrome and immediately institutionalized. Danny Miller was erased. Arthur doesn’t even mention him in his autobiography.

Rebecca faces this in the film but to learn more you have to read a mostly forgotten 2007 Vanity Fair story by Suzanna Andrews. That story– published two years after Arthur’s death at 89–revealed Danny’s existence and his life as adult (a good one, by all accounts). In “Writer” Rebecca bravely addresses her lost brother for the first time head on, and it’s a shock if you didn’t know about him. (Most people don’t).

“Writer” is like that though. Rebecca Miller judges no one in this story, which is refreshing. She simply lays out his public life, and the man she knew as a doting father.  Last night after a screening of the HBO film at the Celeste Bartos theater at MoMA, Miller told another famed playwright– John Guare– that one reason she made “Writer” was to show her father’s sense of humor. (Miller certainly did not write comedies.)

Indeed, a lot of what comes out of “Writer”– shot over three decades– is the humanizing of Arthur Miller. In his early years of success, fame with Monroe, Miller is a lanky, tall, sort of pointy guy, all angles and intense dark round glasses. He was a genius, and one of the towering American playwrights of all time alongside Eugene O’Neill. But then he enters a later period in which he becomes softer, rounder, and avuncular. He never loses his intellectual edge, but the personal life– perhaps because of Morath– shifts to an unexpected geniality. The Arthur Miller of Rebecca Miller’s world is quite different than the earlier version. What’s so special about her film is that Rebecca doesn’t soft pedal it.

But what you do get from “Writer” is that it also could have been called “Carpenter.” Miller was an inveterate woodworker. He made a lot of the furniture in their Roxbury, Connecticut home. It wasn’t just a hobby. “He wasn’t very materialistic, he liked to make things,” Rebecca told Guare last night. “He had a funny relationship to the physical world. I don’t think he placed a lot of value in things.”

Miller also says there wasn’t much talk of Monroe in her childhood home. “I don’t really remember when I became aware of Marilyn,” she said last night. “It would come up in conversation, like little anecdotes. But it wasn’t so dominant in the confines of my house. Then you realize, it’s a bigger deal on the outside. It was the past, it was like anybody’s ex marriage doesn’t constantly come up.” If her father had a theory about his ex wife’s death that he shared with his daughter, it doesn’t surface here. But there are references to Miller using pills while making “The Misfits” and an overall sense of depression. (It certainly would be interesting to hear a conversation one day between Rebecca Miller and filmmaker Rory Kennedy, daughter of RFK.)

As for the story of the “lost” son, Miller eventually met him in 1995, by accident, at a public event. This is not in the film. But from Andrews’ story we learn that there was kind of a happy ending: realizing his son had grown up to be a self sufficient adult, Miller visited with him and included him in his estate.

Obviously, the story of the man who created Willy Loman and all those other deeply memorable but disturbing characters can’t be tied up with a bow. But Rebecca Miller has done an extraordinary job of providing an intimate look into a complex life.

PS IN the audience last night: Julianne Moore, who starred in Rebecca Miller’s excellent “Maggie’s Plan.” with husband director Bart Freundlich, as well as “Sopranos” actor John Ventimiglia, who was featured in Rebecca’s first film, “Angela” and narrated her second one, “Personal Velocity.”

“Arthur Miller: Writer” debuts on March 19th. It was guided by the great HBO doc queen, Sheila Nevins, who was also there for a victory lap for her amazing career.