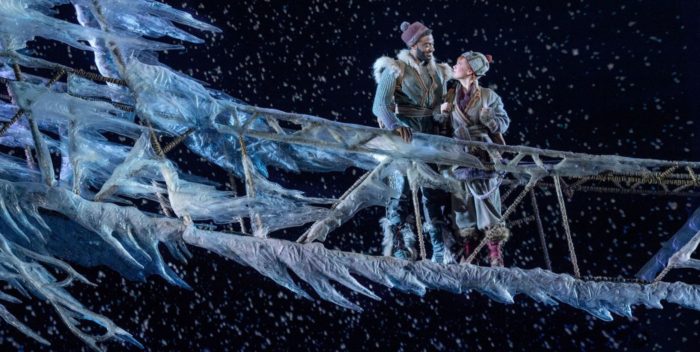 Bruce Springsteen is still on leave from his Broadway show, so the weekly box office had to rely on a newcomer to make noise.

Disney’s “Frozen” musical based on the hit animated movie played just 4 previews last week and made just over $926,000– it sold out right to the rafters. So imagine if they’d done the 8 regular shows that will be the schedule– $1.8 million would have been the box office. “Frozen” opens in April and by then the weekly box office should give Bruce– who takes in $2.4 million a week from 5 performances — a run for his money.

It was a good week all the way around for Broadway shows. Buoyed by rave reviews, Bernadette Peters in “Hello, Dolly!” cleared $1 million for the second week in a row. Yes, it’s half of the Bette Midler take per week, but the budget is probably half, too. Peters’ consolation is that her reviews were through the roof. The show has benefited from her arrival, and that of Victor Garber.

The big news is that Martin McDonagh’s “The Hangmen” which was supposed to transfer uptown to Broadway before Tony eligibility cut off of April 26th may not make it after all. There’s said to be a glitch in the business end of things. This would clear the way for “Harry Potter and the Cursed Child” to win the Tony for Best New Play. Interesting. “The Hangmen” has been extended to March 25th downtown at the Atlantic Theater Company, which will still likely win Best Musical for “The Band’s Visit.”

Maybe someone on the Great White Way didn’t want the Atlantic to pick up Best Musical and Best Play in the same season. If ya know what I mean…