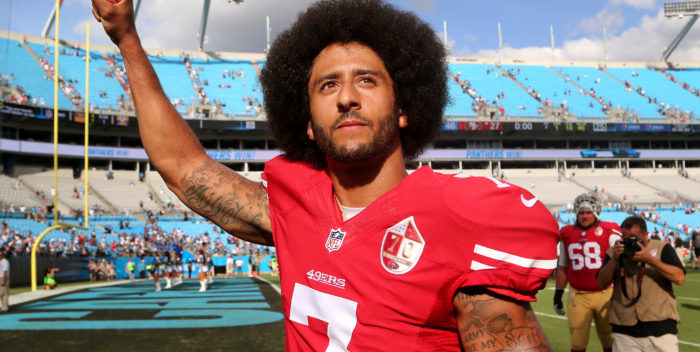 Colin Kaepernick has been named Most Valuable Player by the NFL Players’ Association for the first official week of the football season.

Kaepernick isn’t currently on an NFL team because they’re too cowardly to hire him. It’s an absolute disgrace.

The NFLPA Community Award to the former 49ers quarterback is for “his commitment to empowering underserved communities through donations and grassroots outreach.”

This is a real slap in the face to the NFL owners who are blacklisting Kaepernick for his political stance.

On Sept. 7, which marked the first day of the 2017 NFL season, the free-agent quarterback announced his latest round of $100,000 donations, giving $25,000 each to four charities – DREAM, which provides after-school programs and youth sports opportunities to New York’s inner-city youth; Coalition for the Homeless; The Gathering for Justice’s War on Children, a new program that will launch in 2018 to continue the fight against child incarceration; and United We Dream, which addresses the inequities and obstacles faced by immigrant youth.

Kaepernick followed this up three days later with a Back to School Backpack Giveaway at the Lower Eastside Girls Club of New York, which connects girls and young women to entrepreneurship opportunities, healthy meals and STEM workshops. The Nike backpacks that were distributed at the Sept. 9 event were filled with books and other items for the crowd of students in attendance.

Last year, while a member of the San Francisco 49ers, Kaepernick vowed to donate a total of one million dollars to organizations working in oppressed communities. To date, he has contributed $900,000 toward that goal, benefiting the likes of 100 Suits for 100 Men, Meals on Wheels and Home 2 Heart.

“I’ve been very blessed to be in this position and make the kind of money I do, and I have to help these people,” Kaepernick said in September 2016 when first announcing his pledge. “I have to help these communities. It’s not right that they’re not put in the position to succeed, or given the opportunities to succeed.”

Along with his monetary contributions, Kaepernick created the “Know Your Rights Camp” to empower youth. The free campaigns have been held in Chicago, New York and Oakland with the mission of raising awareness on higher education, self-empowerment and proper interaction with law enforcement in various scenarios.

For being named this week’s Community MVP, the NFLPA will make a $10,000 contribution to Kaepernick’s foundation or charity of choice along with an in-kind donation to him on behalf of our supporting partner Delta Private Jets. Kaepernick, along with the other 2017 Community MVPs, will also become eligible for this year’s Byron Whizzer White Award, which is the highest honor that the NFLPA can bestow upon a player.

The NFLPA Community MVP program recognizes NFL players who are making a positive impact in their local communities. Each week during the regular season, the NFLPA will celebrate one NFL player* who has demonstrated a commitment to giving back to his community. Please visit our website to read more about the program as well as the current and past winners.