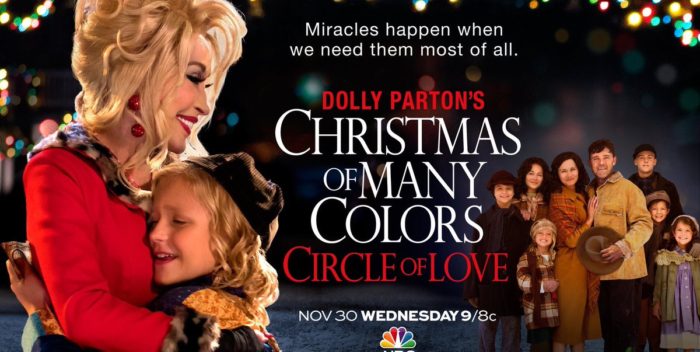 Dolly Parton, looking radiant at 71 in a oh so tight rhinestone jet black dress, left the jaded Hollywood folk speechless last night. She made a grand country entrance and exit at the Variety and Women in Film’s Emmy party at the hotspot Gracias Madre restaurant. The country diva is nominated for her TV movie “Dolly Parton’s Christmas of Many Colors: Circle of Love.”

Dolly led parade of celebrities there including: Viola Davis, William H. Macy and Felicity Huffman, Lea Michele, Keegan Michael Key, Claire Foy, Tracee Ellis Ross, Sarah Hyland, Gabrielle Union and Dwayne Wade, Sterling K. Brown, Kiernan Shipka, Jennifer Nettles clamored to get a word with Dolly, who was unfailingly gracious and lovely. I managed to ask her how she was dealing with being an Emmy darling. “Hey, I’m a country girl. All these stars, well I’m loving it. I’m always star struck and this a hoot.”

The Television Academy also had their nominee soiree last night, this one at the Annenberg Center in Beverly Hills. Laverne Cox was holding court with two-time Emmy nominee Ann Dowd for “Handmaids Tale,” and “The Leftovers.” Ann told me her character tough Aunt Lydia “spurs fear in people. They tend do avoid me. Hey, I’ve been doing this 32 years, my first time at the Emmys. I’m still pinching myself.”

Television Academy Emmy Chairman Hayma Washington told me that “Television has never been stronger, better. Stephen Colbert, this is what he knows how to do. It’s going to be unique to say the least.” Geoffrey Rush, “Veep’s” Tony Hale and Anna Chlumsky, who both told that the next season, which will be the show’s last is “bittersweet,” their co-star Matt Walsh, Samira Wiley and wife Lauren Morelli, the always funny John Michael Higgins, Courtney Vance and Angela Bassett and more. The Emmys are officially in full swing.

PS A tip of the spoon to Halo Top, which sponsored the event (and is delicious, to boot)!