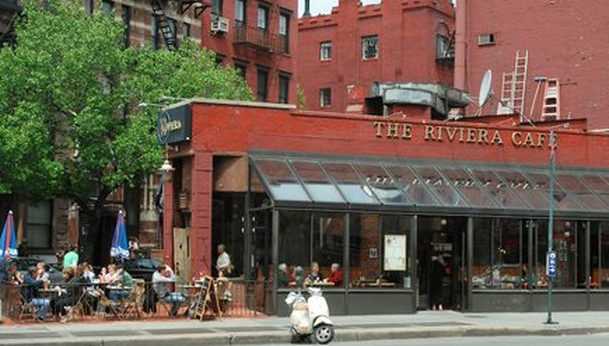 EXCLUSIVE (with a tip of the hat to Michael Musto): The Riviera Cafe on Seventh Avenue South in Greenwich Village will close on August 31st after 48 years. Greed is the culprit as landlords drive rents so high that restaurants cannot survive.

Our thanks to Mayor Bill DeBlasio. It’s under his watch that the city is filled with For Rent signs on retail establishments.

Last week, French Roast on Sixth Avenue, in business since 1993, shut down without warning.

And it’s not just restaurants. On Sixth Avenue, the gateway to the Village, two large retail stores yawn with darkened windows. Between Eighth Street and Waverly Place, the former B. Dalton book store has been empty for years. More recently, Duane Reade closed their two level store.

It’s an embarasment. Rents are so high that there is no regular supermarket at all on Sixth Avenue from Houston St. to 14th St. — just Citarella, a specialty food store.

The irony is that there are now more expensive — mind blowing expensive– apartments and one family homes than ever before. On one block, former Facebook co-founder Sean Parker is adding two former apartment houses to his carriage house, making a triple sized home. On the same street there are already large homes converted from apartment houses– all empty because the owners don’t really live there (neither does Parker).

The closing of the Riviera, especially with NYU coming back into session, is a real blow. It’s not a four star restaurant. But like French Roast, it was a meeting place, someplace where you get a drink, a burger, people watch from the large front windows. In later years they added “sports bar” with flat screen TVs. It was an anchor.

When I called there tonight the person who answered the phone said, “We all want to know what it’s going to be next.”

What isn’t needed: a bank, a drug store, a cold glass tower of $5 million apartments.

New York City is dying under DeBlasio. That will be his legacy. He’s starting to make me yearn for Abe Beame.