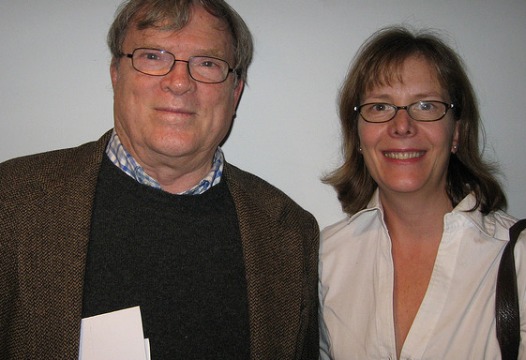 ‘Penny’ as friends know him, is still as sharp and relevant as ever. The 92 year old– the first recipient of a Lifetime Achievement Oscar for documentaries– was recently in LA for a screening. His collaborator wife Chris Hegedus (a past DGA winner for Best Doc), accompanied him to the hip Cinefamily (formerly the Silent Movie theater) for a Q an A moderated by director Allison Anders along with rock legend Bob Neuwirth.

The devoted crowd learned that Penny’s cameras were homemade. “We made 5 or 6 of them,” Penny explained.  “They were the first to synch with the sound.”  Producer Thiago Da Costa asked him what his biggest anxiety was ?  He quipped,  “that one of the cameras would break down.  If that happened with Janis, I would have had to flee.”

What made him do this particular film?  He quipped, “It was cold in New York.” He also said the beginning was challenging.  “The closer I got to the opening door the less I understood what the hell to do. The  cameramen and I [including the legendary “Grey Gardens” director Albert Maysles] would meet every morning at this awful waffle house.  We would write notes on the back of the menu.  I guess I was avoiding professional film making.”

Penny and Bob noted of the singular time that it took place.  “One of the great things about this film is that people were not afraid. The audience, the police, humanity wasn’t afraid.  People on screen were really free.  After that was the Altamont festival, then RFK getting shot.  Perhaps the last innocent portrayal of that time.”

A few more tidbits?  Penny added,  “At first ABC was supposed to air it, but they pulled out after they say Jimi Hendrix singing “Wild Thing” and humping the speaker. “ Bob added, “Jimi was completely burnt at the time, they all were.  None of them even tried to hide it. “

The film wasn’t  successful at the beginning.  Penny explained, “We then we got wonderful press.  “Life Magazine” and such and then we played at Lincoln Center.  After that it caught on.  But I never intended it to be a sociological thing.  I wanted it to be about the music.  And it did find its’way. “

The next night Penny and Chris went over to the Sunset Marquis Hotel, the  ultimate rock and roll hotel destination with it’s own recording studio and still as lively as ever, for a Morrison Gallery photo exhibition of classic stills from the movie.

Chris and Penny never stop, they just were at the Piazza Maggiore in Bologna Italy for a screening of the film at the Il Cinema Ritrovato.