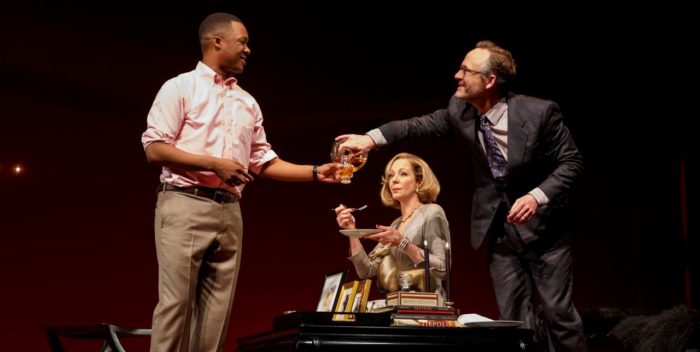 Allison Janney leads a superb cast in the revival of John Guare’s “Six Degrees of Separation.” She, John Benjamin Hickey, and Corey Hawkins should all be up for Tony Awards, and Janney may very well win Best Actress in a Drama. (Her competition likely includes Sally Field, among others.) Janney is in “Six Degrees” during her off time from CBS’s hit comedy “Mom.”

For the first time since that show started Janney is putting herself in the Lead, not Supporting category for the Emmys. Could she end Julia Louis-Dreyfus’s winning streak? (JLD has won 6 times in a row!) Janney told me after last night’s opening: “It was time to to do it. We did the same thing on West Wing. It opens up possibilities for other actresses in supporting.”

She means her co-star Anna Faris would now have a clearer shot in the Supporting category. And don’t worry, Janney — a multi-threat actress, skilled in theater, movies and TV — has a bookshelf of Emmys already: two for supporting in “Mom,” two for supporting and two for lead in “The West Wing.”

Her Tony nomination is secure. (She was nominated yesterday for a prestigious Outer Critics Award.)

Great party at Brasserie 8 1/2 following the show— Amy Brenneman, Joe Mantello, Matthew Broderick among those who stopped in. Caroline Aaron, one of Woody Allen’s favorite actresses, is back in New York. Amazon has given a series she’s in a two year guarantee (“The Marvelous Mrs. Maisel” from “GIlmore Girls” creator Amy Sherman Palladino.)

Back to “Six Degrees”:

The first time around, back in 1990, John Guare’s “Six Degrees of Separation” seemed so wonderful in its Broadway debut, you wouldn’t think anyone could reproduce that magic. Stockard Channing, John Cunningham and Courtney B. Vance were the main trio, and many awards followed. Channing even went on to an Oscar nomination for the movie version.

Twenty-seven years later,  Janney returns as Ouisa Kitteridge, the Upper East side wife of art dealer Flan, now played by John Benjamin Hickey. Corey Hawkins, of “Straight Outta Compton” and “24” is Paul “Poitier,” the black kid who insinuates himself into wealthy households. And the play? It has not been changed, it’s word for word, and now we know it’s timeless. It’s a little masterpiece. The cast is exceptional, the production is perfection.

Is it the actors? The words? The double sided Kandinsky that hangs over the stage? The way Guare has invested these self involved people with just enough empathy that they learn a little, we learn a lot, as “Six Degrees”– a concept that wound up finding its way into the American lexicon as if it had always been there–unravels.

Guare based his story on a real one. In 1983, a young black man posing as Sidney Poitier’s son “Paul” (but really named David Hampton) inveigled himself into a number of upper East Side homes. He said he was a college friend of the parents’ children, and they believed him. Of course, Poitier has no sons, but the real life version of the Kitteridges (Osborne Elliott, former dean of the Columbia School of Journalism)  and their friends (ex PBS chief John Jay Iselin) took him in and were fleeced emotionally and to some extent financially.

Janney’s Ouisa is a little more brittle than Channing’s. The latter played her a little like a woman child trying to make sense of it all. Janney is more direct and a little less enchanted with “Paul.” John Benjamin Hickey is just right as Flanders Kitteridge, trying to keep their lifestyle afloat by privately selling masterpieces for millions. I loved that you could see his virtual flop sweat and elation simultaneously,

And then Corey Hawkins shows up as “Paul” who in one night upends their lives.  You know him from the new “24” and from playing Dr. Dre so beautifully in “Straight Outta Compton.” Hawkins fills Vance’s big shoes (and surpasses the memory of Will Smith in the movie) beautifully. He makes Paul incredibly human (so important in a play in which that word is said often) and sympathetic.

What a night– a great night in the theater, not to be missed. And the Tony category of Best Revival of a Play now has some hot competition with this, “The Glass Menagerie,” and “Present Laughter.” (Go see Kevin Kline if you haven’t already!)