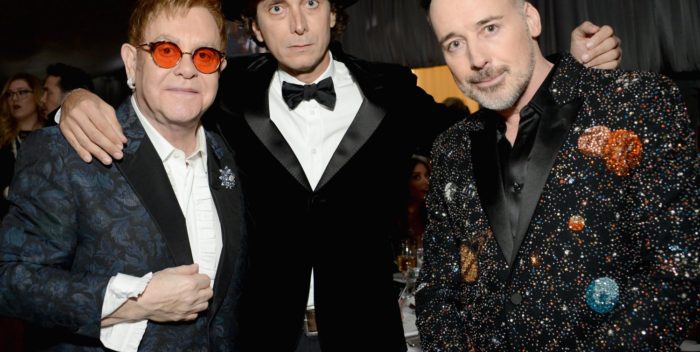 Get back, honky cat! Elton John and David Furnish raised a record breaking $7 million Sunday night with their 25th annual Oscar bash. The money goes to their EJAF AIDS Foundation.

The event, which started years ago as a smallish dinner at the Maple Drive Restaurant, has now come to be this famed soiree in a massive tent facing the Pacific Design Center. Bravo! The fun, mostly non-political night was sponsored by BVLGARI, Neuro Drinks and Diana Jenkins. The event featured a five-course dinner prepared by Chef Gordon Ramsay, an exciting live auction.

Sir Elton quipped before he introduced the live auction, “Wow. Thank goodness we didn’t have Warren Beatty do the auction.” Elton noted later that, “As much as I wanted ‘Moonlight’ to win, you have to feel bad for ‘La La Land,’ for having to give that trophy back.” Celebs Peter Fonda, Adam Lambert and Russell and Ciara Wilson were among the celebrity pledgers who were also nudged by Sharon Stone who got on stage and noted, “Last year $6.3 million was raised this very Oscar night. Let’s set our sights on even more this year.” The special performance by St. Paul & the Broken Bones had the VIP crowd on their feet. Elton joined in at the end, prompting lead frontman Paul Janeway to declare, “you can’t beat this shit!”

And what a group of guests! For one thing, Sting and Trudie Styler and a lot of their family headed over to the Elton gala after Sting finished his performance on the Oscars. Daughter Kate Sumner (who sings “Amazing Grace” on the new “Logan” commercial), son Giacomo, and daughter Mickey with fiancée Chris Kantrowitz all arrived as well.

There were plenty of other stars, too, starting with of course Bernie Taupin, plus the great Anita Baker, my pal Smokey Robinson and his wife Francis, as well as “Transparent’s’ Jeffrey Tambor, (who playfully was telling the reporters on the carpet to sneak into the main party) his TV ex-wife, the wonderful Judith Light, (currently at the Pasadena Playhouse co-starring with Al Pacino in “God Looked Away”) and their TV daughter Gabby Hoffman.

The “Transparent” team also took the stage to ask the bigwigs to donate. More celebrities included Big Sean, Tim Allen, Leona Lewis, Freida Pinto, Matthew Morrison, Michelle Dockery, Lea Michele, Tony Goldwyn, Andie MacDowell, Heidi Klum– you get the picture! Longtime Elton friend Eric McCormack, they first met when Elton was a guest on “Will and Grace,” was fielding congrats from all about the show being revived. He and Laverne Cox had a playful dance, with Smokey Robinson and Sharon Stone joining in. Quincy Jones bopped along.

Laverne shouted with glee when her pal Viola Davis won– and that got the room’s attention. Elton then added, “I never thought we’d get to 25 years. It’s grown from a little seed into a big tree.” Furnish said: “HIV/AIDS continues to be a global issue. We’re making some fantastic strides, but its important people are not marginalized in society and that everybody is treated equally and fairly.” Elton and David, this party never fails to be star studded, and always raises a ton of money for a most worthy cause.