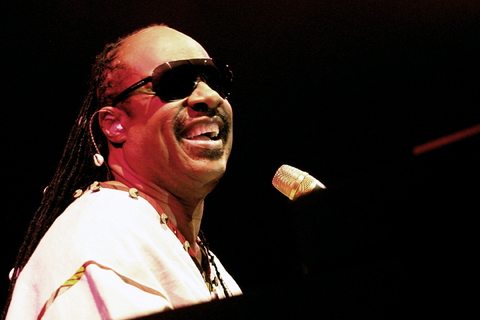 Stevie Wonder brought his extended family to the snazzy Republic Records after party last night, held at very hot spot Catch LA in West Hollywood. When I asked him what he thought of the Grammy Awards, the music legend replied: “I was surprised Beyonce didn’t win.” We did talk about Adele’s heartfelt speech in which she practically gave Beyonce the award, and Stevie acknowledged that. But like a lot of people who don’t get how the Grammys work these days, he didn’t get it. Those gargantuan sales for “25” made it the defacto winner for over a year.

There were Paris Jackson sightings, although I didn’t see her. Paris did a great job as a Grammy presenter early in the show. On Instagram her brother Prince posted a tribute to her, and revealed that she had designed her own dress. She looked smashing. Good for her. I just hope she takes her climb to fame slowly. She has a tremendous future!

The Grammy parties were a scattered lot, and it wasn’t that simple to get from place to place quickly. DefJam and Universal Music had theirs at the Ace Hotel, where Katy Perry held court and chatted with UMG chief Lucian Grange. That’s where I ran into Don Cheadle, Russell Simmons, and amazingly a real legend: John Cale of the Velvet Underground.  Even though VU received a Lifetime Achievement Award, they and Cale were largely ignored last night. Pity.

Up at the Hotel Bel Air, Sony Music spent a lot of money but I don’t how much bang they got for their buck. Adele showed up, but she wouldn’t take photos. Only one turned up on the photo service sites. John Legend, who was very moving with Cynthia Erivo for the In Memoriam segment, popped in. Otherwise, Sony was light on talent.

And there was no sign of Beyonce after her loss to label mate Adele. But heavily pregnant with twins, and no doubt exhausted from staging her unusual Grammy presentation  about birth, life, and the Last Supper, Bey probably went home.