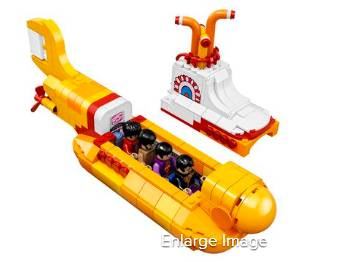 The Beatles are now being memorialized in LEGO. Soon there will be a 550 piece LEGO set for “Yellow Submarine” including John, Paul, George, and Ringo figures, Jeremy– the “Nowhere Man”–and the submarine itself. The set will retail for $60 and hit stores on November 1st. No word yet on Blue Meanies or Sgt. Pepper’s Lonely Hearts Club Band or Allen Klein (just kidding) but I’ll bet they will come later as expensive extras. This is only the beginning. Look for this thing to sell out instantly. It’s a great idea because it will seed the next generations for Beatles music. Last week the Daily Mail ‘reported’ that Beatles producer George Martin left an estate of only 1 million British pounds. Haha.