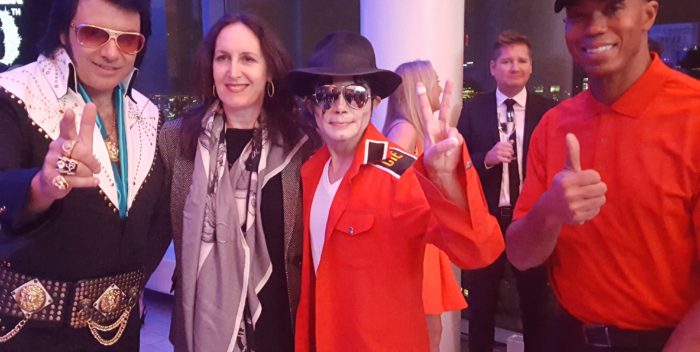 Elvis is alive! So is Michael Jackson! Frequently on the cover of the National Enquirer, the two entertainers showed up last night for a swell gathering atop the Trump Soho hotel. They were there to help publisher David Pecker celebrate the supermarket tabloid’s 90th anniversary in style.

Not only were Elvis and Michael there, but also Hillary Clinton, Donald Trump, Barack Obama and Tiger Woods. Since the real people wouldn’t — or couldn’t — attend, Pecker’s team hired some dead on celebrity lookalikes, and they were better than the real thing.

Pecker, who has saved the Enquirer and his company American Media time after time from financial oblivion, was in rare form. He deserves a round of applause for saving and maintaining the thorn in celebrity and politicians’ sides that was run for years in the bad old days by Generoso Pope. Pecker even showed a clip from “60 Minutes” in which Mike Wallace tried to get Pope to admit that the old Enquirer was owned by the mob. Even Wallace, who used to reduce his interview subjects to tears, couldn’t get to first base on that one!

Not all of these people get along during the day, but last night there was a truce. I even let Diane Dimond take a photo of me with the Michael Jackson impersonator. (He was very nice, actually.)

By the way, Elvis told me he’s living in Michigan!