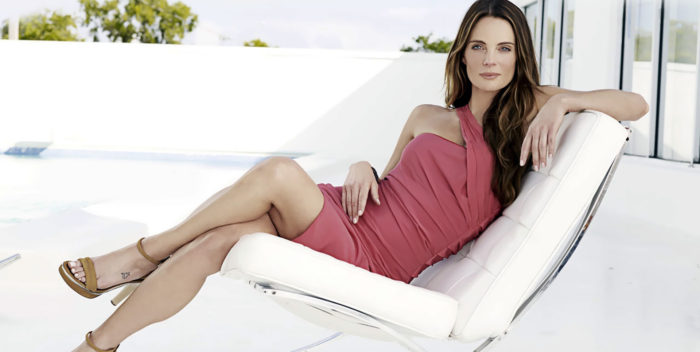 My quick trip to Miami was a disaster travel wise thanks to the thuggish TSA at La Guardia and incompetent American Airlines in Miami (eight hours from airport arrival to home thanks to the airline not telling the truth for hours to trapped fliers.)

But: a dinner at the famous Miami Beach eatery The Forge proved especially illuminating. Shareef Malnik, long time owner of the Forge, is a newly-wed. A year or so ago he married actress Gabrielle Anwar, who was so good in “Burn Notice” on USA Network and is remembered for dancing the tango with Al Pacino in “Scent of a Woman.”

Gabrielle went to Miami seven years ago to film “Burn Notice” and never left. She and Shareef were married last year in Montana. Now they’re settled into Miami life– so much so that Gabrielle told me after dinner that she’s completed her first novel, called “Timepiece.” She’s getting ready to send it to New York publishers. By the way. Gabrielle is Hollywood royalty– her father is the great film editor Tariq Anwar.

The Forge has been in Miami for decades, but it’s under a whole new rehab. The food was delicious, and they offer entertainment like the old Miami nightclubs– female singers who appear through dinner in sequins and high heels, belting out torch songs. And yes, it was packed on Friday night. My companions included Sam “Soul Man” Moore and his manager wife Joyce, who are in town working on a project. The waiters were thrilled to meet the Rock and Roll Hall of Famer.

I was thrilled to meet famed record producer Rudy Perez, who is to Miami what Paul Shaffer and Steve van Zandt are to New York and New Jersey– and maybe more. Rudy and equally famous songwriter Desmond Child (Livin’ La Vida Loca, Living on a Prayer, Dude Looks Like a Lady, etc) will put on the Latin Songwriters Hall of Fame in Miami on October 13th.